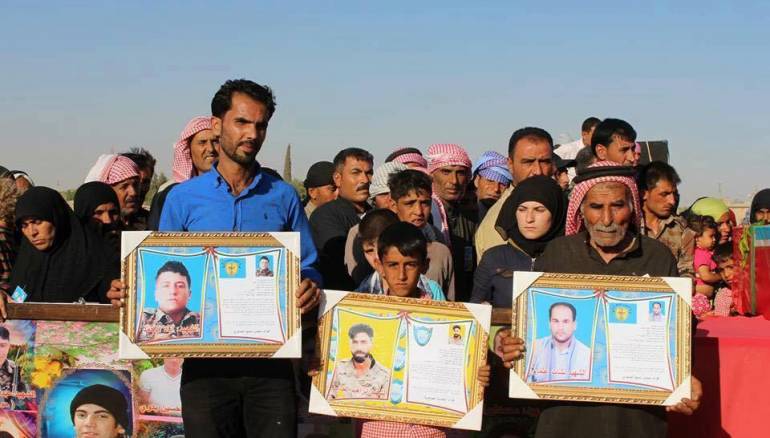 The number of Democratic Union Party (PYD) militants killed in action has increased in recent weeks as fighting intensifies against Islamic State (ISIS) forces in their stronghold of Raqqa. The PYD is the main fighting component of the Western-backed Syrian Democratic Forces, which is attempting to liberate Raqqa from ISIS.

Local sources reported that bodies of fighters arrived from Raqqa to Hassakeh for funerals. The PYD recruited the fighters on salary or through force to bolster troop numbers in the global coalition forces. The expanding battle fronts forced the PYD to recruit more fighters to cover its long fronts in Raqqa, Hassakeh and Deir-ez-Zor.

Speaking to Zaman al-Wasl, a source explained that about 50 PYD members were killed more than a week ago in the neighborhoods of Raqqa’s old city in a mistaken air raid by the coalition aircraft. Many of the remaining fighters fled as a result of the airstrike.

Due to the numerous deaths and the refusal of PYD authorities to hand over some bodies to their relatives for burial, limited clashes erupted between the families of the deceased fighters during a funeral procession near Hassakeh. The clashes erupted after the military police objected to mourners chanting, “Allahu Akbar [God is great]” during the funeral procession. The police had asked the mourners to limit their chants to “Shahid Namran”, which means “The Martyr never dies.”

During the clashes, one Syrian Kurdish party staff member was killed after being stabbed while dozens of civilians were injured at the hands of PYD militants.

In July 2017, the party and its multiple militias released the names of more than 100 people killed in battles against ISIS forces in Raqqa. This did not include those killed in explosions and clashes in different parts of Hassakeh.