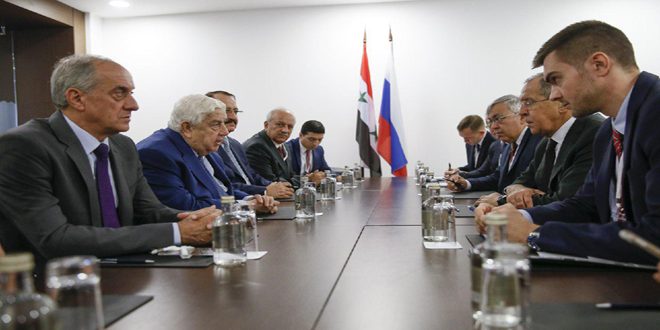 Syria's foreign minister has accused Turkey of illegally intervening into the northern Syrian province of Idleb under the pretext of honoring the Astana agreement.

Speaking in the Russian Black Sea resort city of Sochi on Wednesday, Foreign Minister Walid al-Muallem denied the Astana agreement on de-escalation zones had any connection to the Turkish incursion.

“We still and will always consider the Turkish presence in Syria as illegal. The Turks say their presence is taking place under the Astana umbrella, but I realized today that Astana has nothing to do with this Turkish act. Therefore, any measure that is not coordinated with the Syrian government is an act of aggression, and we don’t recognize its legitimacy,” Muallem said.

Earlier, during his meeting with Russian counterpart Sergey Lavrov, Muallem also condemned the U.S.-led international coalition, accusing it of destroying everything in Syria except for the Islamic State (ISIS) terrorist organization.

He said that Syria will demand the disbanding of the coalition which Washington uses to destroy the country and indefinitely prolong the war.

In turn, Lavrov said that the victories achieved by the Syrian army, supported by Russia's air force, have increased the likelihood of a solution to the crisis in Syria.

“Today we have a chance to discuss foreign policy aspects of our partnership, first of all that besides the success in the war on terror while the Syrian army is advancing backed by Russia’s Aerospace Forces, the preparations for political settlement are becoming more pressing,” he added.

Responding to ongoing investigations on the use of chemical weapons in Syria, Lavrov said Russia would not allow the Syrian government to be blamed for the attacks in the absence of any proof.

“We will also strongly counter any attempts to politicize the chemical dossier and the attempts to accuse the Syrian government without any proof or professional investigation of a whole number of incidents, which occurred with the use of chemical warfare agents on your country’s territory,” Lavrov said.