The Syrian government voices support for the Iran nuclear deal 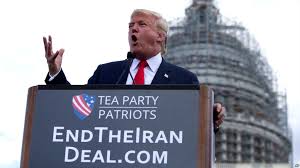 Syria dismissed the U.S. administration’s position on the Iranian nuclear deal and its threat to cancel the agreement and impose new coercive sanctions on Iran, saying that this stance shows that this administration does not respect its obligations under international agreements.

This also shows that the U.S. administration’s attitudes toward international security and stability cannot be trusted, an official source at the Syrian Foreign Ministry told SANA in a statement on Sunday.

The source said that it is “unacceptable” that the U.S. administration turns its back on the deal and uses the language of threats, as this “contravenes international conventions and pacts,” while Iran has strictly committed to the deal, as confirmed by the International Atomic Energy Agency and the countries that are signatories to the deal, including the United States’ allies.

The source said that Syria was not surprised by the Trump’s administration’s stance against the Iran nuclear deal and its attempt to pull out of it, in line with the anti-deal attitudes of the Israeli government and its supporters in Washington.

Syria also slammed the U.S. administration for imposing unilateral coercive sanctions against Iran and its institutions at a time when Tehran is actively contributing to fighting terrorism in the region, unlike what it said the U.S.-led coalition has been doing.

The Foreign Ministry’s source voiced Syria’s condemnation of the U.S.’ aggressive policies against the interests of peoples, warning that this would lead to increasing tension in the region and the world and jeopardize international peace and security.

The source also expressed Syria’s solidarity with Iran and the rights of its people to develop their technological, scientific and developmental capacities.

Syria has supported the deal reached between Iran and the P5 1 countries in 2015, considering that the agreement would contribute to cementing regional and international security through adopting dialogue and respect for international law as means to solve problems regionally and internationally.

In the meantime, Syria has continued to draw the international community’s attention to the dangers posed by the existence of the Israeli nuclear arsenal on the security and stability of the region.