President says national team's performance is an indicator that the terrorist war on Syria has failed, state media reports 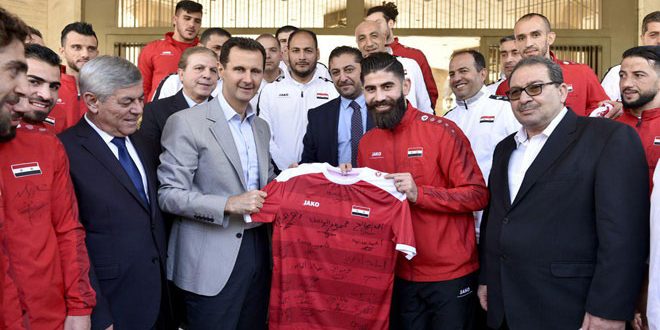 “This achievement and other achievements made by Syrians in several fields wouldn’t have been possible without the successes and victories achieved by the army and armed forces against terrorists, nor without the steadfastness of the Syrian people in the face of the most vicious war that Syria has experienced in modern history,” Assad said during a meeting with players and staff.

Assad said the team's accomplishment is a strong indicator that the terrorist war targeting Syria has failed to undermine the peoples' will, instead serving to make them stronger and more unified.

The national team’s improved performance under the harsh conditions in Syria is an achievement in and of itself and must be built upon, he added.

For their part, the team thanked the president for his support and care, voicing determination to achieve better results in coming events and raise Syria’s flag high.

They said that support shown by the Syrian public has been present in their minds during their matches, and will form extra motivation for all the team’s members to do their best in the future.