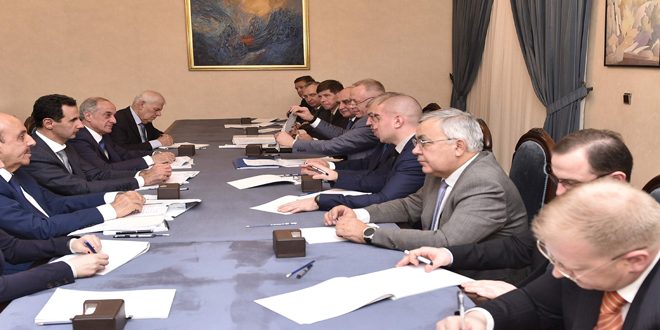 Syrian President Bashar al-Assad met on Thursday with Russian special envoy for Syria Alexander Lavrentiev to discuss preparations for the seventh round of meetings in the Kazakh capital of Astana.

During the talks, Assad said that the liberation of Syrian territory from terrorism by the Syrian army and its allies has prepared the ground for political action. He said that the Syrian government continues to welcome any political initiative seeking to end the Syrian bloodshed and restore security in a manner that guarantees unity and national sovereignty.

The Syrian state is determined to continue the war on terror and support the political track by speeding up national reconciliations and dialogue, Assad explained. He also pointed to plans to hold a national dialogue conference with the aim of amending the constitution and holding new parliamentary elections.

Lavrentiev, who will head the Russian negotiation team at Astana, said that Moscow will continue to support Syria in its war against terrorism, as well as a political solution that preserves Syria’s territorial integrity and sees the return of security and stability.