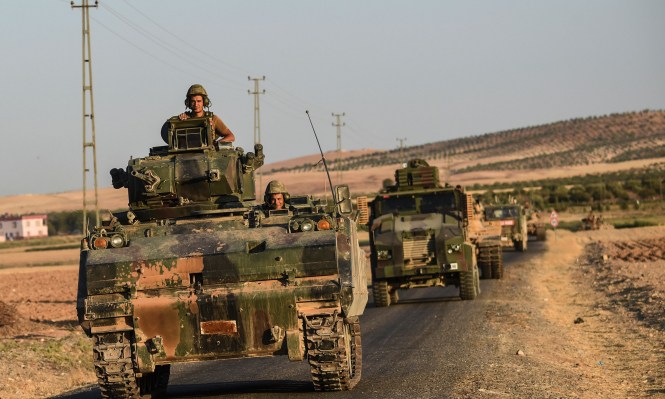 A Turkish military convoy was attacked with RPG rockets on Monday while heading from the countryside of Idleb to west Aleppo near the village of Zarzita.

According to opposition media, the army convoy entered into Idleb through the village of Kafr Lousin on the Syrian-Turkish border before it was struck by unknown assailants. The attack damaged a Turkish military vehicle while it was crossing from the villages to the western Aleppo countryside.

It added that the Turkish forces shot live bullets into the air while searching for those who carried out the attack on the convoy. The convoy was heading toward the villages of Qah and Salwah in Idleb through the city of Darat Izza, west of Aleppo.

Turkey sends daily military reinforcements and convoys bearing troop transports, armored personnel carriers and soldiers to the checkpoints overseeing the de-escalation agreement, which was established in the Idleb countryside and western Aleppo countryside.

Ankara sent its forces into Idleb and the western Aleppo countryside on Oct. 12 last year in coordination with Hay’at Tahrir al-Sham (previously the Nusra Front, Al-Qaeda in Syria), and has deployed observer forces in points overlooking Kurdish People’s Protection Unit positions in the Afrin canton.