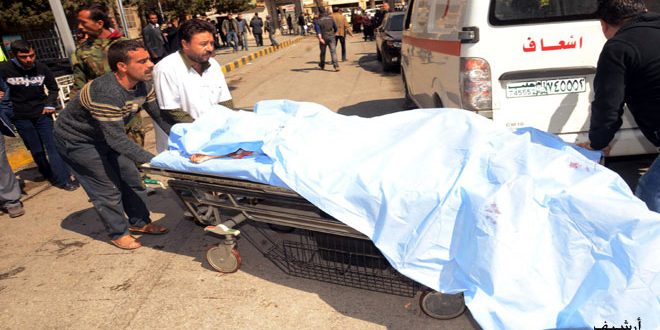 Two civilians, including a child, were killed and three others were wounded on Tuesday when terrorists shelled Al-Nile Street in the city of Aleppo.

An Aleppo police source said that terrorists positioned in the western outskirts of the city targeted the area with a number of shells, adding that one fell on a kindergarten bus killing the driver and a 2-year-old child, as well as injuring three teachers.

Later, a source at Damascus Police Command said that armed groups located in the Eastern Ghouta area in the Damascus countryside shelled a building near the Al-Tahi roundabout in the neighborhood of Masaken Barzeh, Damascus city, injuring one woman and causing damage to houses and property.

SANA’s correspondent said that the Syrian army responded to the attack by targeting the area from which the shell was launched with precision strikes, inflicting losses upon the armed groups.