Turkish troops crossed into Syria on Sunday as part of Operation Olive Branch, which aims to establish a 'secure zone' according to Ankara 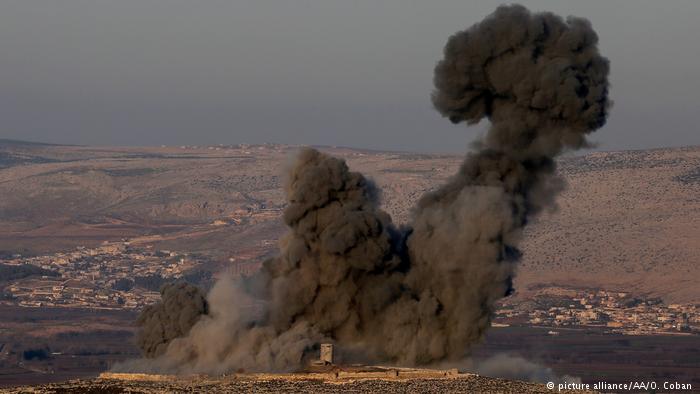 Kurdish figure Aldar Khalil said that the Kurds in the city of Afrin had rejected a Russian proposal to avoid “Turkish intervention in the city,” as Kurdish People’s Protection Units (YPG) lambasted Moscow, blaming it for the assault on the northern Syrian city.

Khalil, a YPG commander, said over the phone on Saturday that Russia had asked the Kurds in Afrin to hand over their regions to the Bashar al-Assad regime in order to avoid the Operation Olive Branch campaign which Turkey launched against Kurdish fighters in the city in the northwestern Aleppo countryside.

Khalil added that the Kurds in the city of Afrin had “rejected the proposal and decided to defend all their territories,” according to the Russia Today website.

This comes as the YPG militia slammed Russia and blamed it for that was happening to Afrin, according to a statement it issued.

The statement said that “the Turkish army could not have carried out this attack without the agreement of the great powers, led by Russia, which had deployed its forces in Afrin. Therefore, as much as we blame the occupying Turkish forces for this attack, we also blame Russia for this operation and any massacre which occurs to civilians.”

Russian observer forces withdrew last Friday from the Afrin area to areas under regime control in north Aleppo ahead of the Turkish operation, with dozens of Russian military police moving from their positions around the village of Kafr Jinnah north of Afrin toward the cities of Nubl and Al-Zahraa, both of which are under regime control.

On Sunday, the Turkish Prime Minister Binali Yildirim said that Turkish tanks had entered the city of Afrin, but the Reuters news agency quoted Kurdish leaders as denying the claim.

On Saturday, the Turkish chief of staff announced the launch of the military operation in Afrin, saying that it aimed to impose stability and security on Turkey’s border and in the region and to eliminate the PKK (Kurdistan Workers’ Party), a designated terror group, the YPG, PYD (Democratic Union Party) and the Islamic State (ISIS) in the city of Afrin, and to “save the residents of the area from the oppression of terrorists.”