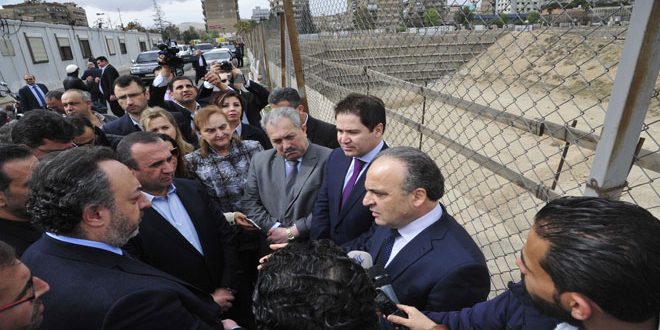 During the visit, the delegation was briefed on the reasons behind the pause in construction and the new vision to relaunch the projects.

Khamis said that the government is prioritizing steps to complete halted development in all provinces, adding that the state is ready to overcome all obstacles facing stalled projects.

The Syria Towers project in Baramkeh consists of five towers, each consisting of 40 floors, and includes a commercial center, a hotel, furnished apartments, commercial offices, cinemas, halls for conferences and weddings, and parking for 2,500 cars.

The Movenpick project in the neighborhood of Kfar Sousa is built on an area of 10,250 square meters. The main structure of the project was completed In 2008, and includes a hotel consisting of 286 rooms, as well as suites, restaurants, halls, a commercial center and parking for 1,000 cars.