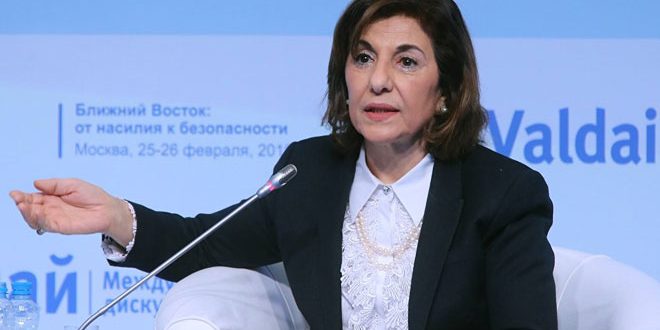 Bouthaina Shaaban, political and media advisor to President Bashar al-Assad, said that the Turkish aggression on Syria and the illegitimate U.S. presence violates international law and impedes the political solution and victory over terrorism.

Speaking at Valdai Discussion Club on Monday, Shaaban said that the Turkish regime has helped terrorists to cross into Syria, only to violate international law by entering northern Syria when it realized these terrorists had failed.

She stressed that the Turkish regime’s violations of the cessation of hostilities pact is complicating cooperation among the guarantor states of the agreement, stressing that the United Nations should condemn the Turkish occupation of Syrian territory.

Shaaban said that the American presence in Syria and the attempted U.S.-European intervention has prolonged the crisis, adding that the U.S. aggression on Syria is continuing through Washington-backed mercenaries.

In comments to journalists on the sidelines of the event, Shaaban said that the illegitimate U.S. presence in Syria provides cover for the remaining terrorists, which Syria has been fighting for years, adding that the Turkish regime attacks Syrian territory and uses terrorists as pawns.

“Meanwhile, the Russian, Syrian and Iranian diplomacy builds upon these facts and attempts to reach a political solution for the crisis, but the Turkish and U.S. aggression prevent reaching such a solution, and perhaps that is one of the goals of the aggression,” she added.

Regarding the next steps following the Syrian National Dialogue Congress in Sochi, the Shaaban said that the Syrian state is still pursuing two tracks. The first involves fighting the remaining pockets of terrorists to which Ankara and Washington provide cover, while the track has seen cooperation between Syria and Russia on all possible steps to end the bloodshed and lead to a political solution.

As for the repeated U.S. attacks on Syria, Shaaban said: “We will not allow any aggressor to stay in our territory, and shooting down the Israeli plane is one of the ways to deal with such aggression.”