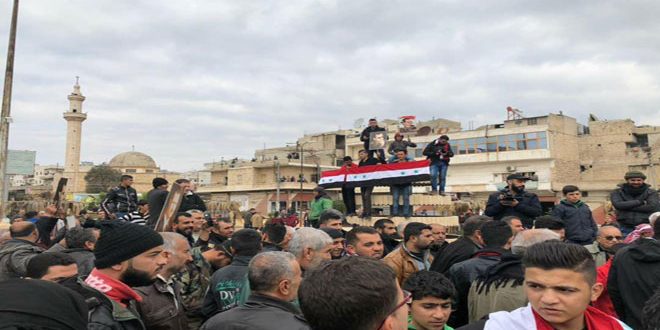 Afrin’s locals gathered in the city’s main square on Thursday to declare their unity with the Syrian homeland and welcome the efforts of the Popular Forces in confronting the Turkish regime’s continued aggression on the area.

Residents reiterated Afrin’s status as an integral part of Syria, affirming that they will resist attempts by Turkish forces and allied terrorist mercenaries to desecrate their land.

Over the past two days, groups of Popular Forces arrived in Afrin to support the locals against Islamic State (ISIS) terrorists and the continued aggression of the Turkish regime.

Turkey has continued its brutal aggression on Afrin for over a month, causing the death and injury of hundreds of civilians, the majority of whom are women and children.