The Damascus suburbs are being subjected to severe bombardment and chlorine attacks, Zaman al-Wasl reports 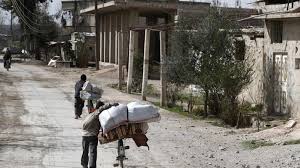 Syrian rebel group Faylaq al-Rahman accused Russia of seeking to forcibly displace the population of the rebel-held Eastern Ghouta of Damascus, after Moscow said it would give opposition fighters and their families safe passage out of the area.

Meanwhile, regime airstrikes killed at least nine civilians in the Jisreen suburbs, following a bloody Monday, when Syrian regime bombardment on the Ghouta killed at least 85 civilians, according to the Syrian Observatory for Human Rights.

The Britain-based war monitor said at least 19 of the victims were killed in the town of Hammuriyeh, where regime aircraft used crude improvised munitions known as "barrels bombs."

The Observatory warned that toll could rise further as bodies were still being retrieved from the rubble.

At least 30 people have been treated in the Eastern Ghouta suburbs after suffering symptoms consistent with exposure to chlorine gas, the Civil Defense rescue group said on Monday.

The eighth chlorine attack on Ghouta in two months targeted the town of Hammuriyeh.

The latest deaths brought the number of civilians killed since regime and allied Russian forces intensified their campaign against Eastern Ghouta in February to 800.

Another 5,640 people have been wounded in the Eastern Ghouta, an agricultural region east of the capital Damascus, according to a local opposition-run health directorate.

On Feb. 27, a chlorine gas attack by the Assad regime killed a child in the area of Al-Shayfouniya, according to a statement issued by the local branch of the opposition Syrian Interim Government's Health Ministry.

"At least 18 victims were treated with oxygen nebulizing sessions," it added.

Last week, the Russian Defense Ministry accused rebels of preparing to use toxic agents so they could later allege regime forces of employing chemical weapons.