The Syrian foreign minister expresses solidarity with the island nation over the crippling U.S. economic siege it suffers from, the state news service reports 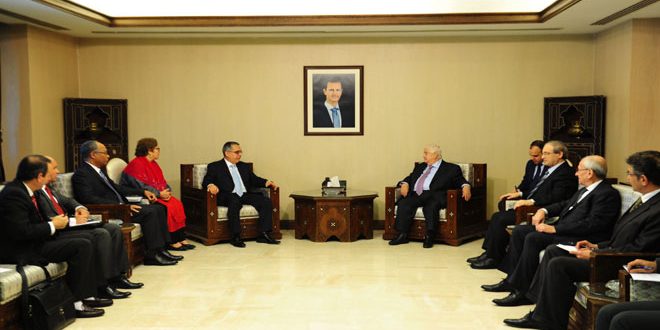 The two sides’ viewpoints were identical on the importance of developing and bolstering those relations on all levels, stressing the importance of coordinating the stances of the two friendly countries in the international circles in support of their just causes.

The latest developments in Syria and the region were also touched upon during the meeting.

Moallem briefed the Cuban side on the efforts exerted by Syria in facing the fierce war waged against it by terrorist organizations backed by regional and international forces, which seek to dominate and control Syria.

Moallem expressed appreciation of Cuba’s supportive stances to Syria, renewing Syria’s support to Cuba in facing the unjust U.S. economic siege against it.

For his part, Medina affirmed Cuba’s continued support to the Syrian government and people in facing the terrorist war, thanking the Syrian government for its stance toward ending the economic siege on Cuba, stressing that his country will continue supporting Syria in the international circles.