The Syrian army is on the verge of taking the town in the Eastern Ghouta's south, Zaman al-Wasl reports 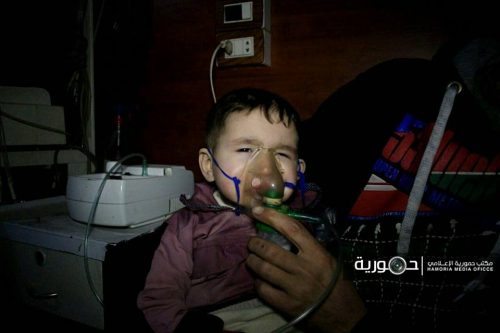 The night attack on the village of Hammouriyah killed 13 people, including four children and two women, according to local activists and the rescue group.

The gas affected many women and children, but their number and condition are not yet clear, since intense attacks by the regime and its supporters are ongoing and the roads are closed, according to Anadolu Agency.

The pro-Syrian regime Lebanese television channel Al-Mayadeen said Thursday that the army was close to taking the town of Hammouriyah in the southern pocket of the Ghouta.

On March 12, the Assad regime cut the Eastern Ghouta into three distinct parts in order to capture southern Hammouriyah, where it also conducted attacks, including using poison gas, on civilian areas.

One-hundred-and-sixty sick and wounded civilians were evacuated from the besieged suburbs on Wednesday, in a second batch following the 190 evacuated on Tuesday, a local reporter said.

Russia’s task command in its coastal Hmeimeem base, which brokered the evacuation deal, said 350 people have crossed out of the stricken enclave.

Wednesday's bombardment by the regime and its ally Russia has killed 25 civilians, among them three children, the Syrian Observatory for Human Rights said.

"At least 25 civilians, including three children, were killed on Wednesday, most of them in regime airstrikes and others in Russian raids on an area controlled by [rebel group] Faylaq al-Rahman," the Britain-based monitoring group said.