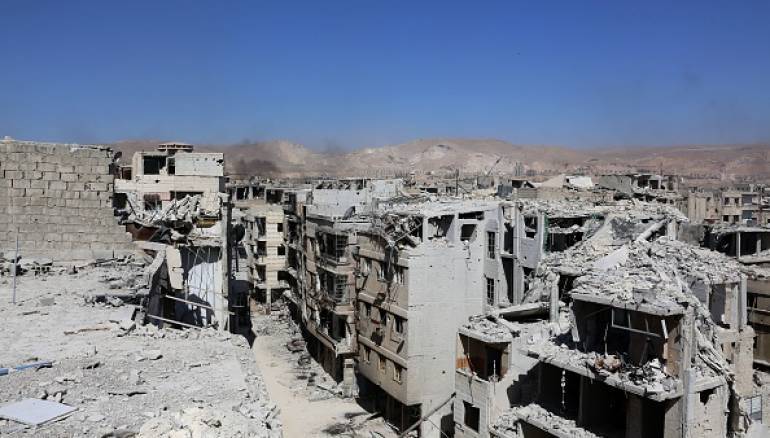 Regime forces have taken almost 90 percent of the Eastern Ghouta after 38 days of the deadliest offensive ever in the 7-year-old war, where more than 1,700 people have been killed and 105,000 people evacuated.

A pro-regime militia in the Ghouta has made its own wanted list that includes names of relief and aid workers, and has delivered it to the regime's forces, saying the names listed are sleeper cells and should be eliminated from the Ghouta.

About 150 people have been arrested in the wide-ranging raids in Saqba and Kafr Batna.

The Syrian regime has used sieges and heavy bombardment followed by evacuation deals to recapture swaths of rebel-held territory.

The regime smashed the Ghouta enclave into three isolated pockets before it sought separate evacuation deals for each.

However, with talks suspended, the fate of Douma's residents remains uncertain.

Meanwhile, the Jaish al-Islam rebel faction denied on Monday that its fighters were ready to lay down their arms and leave Douma.

"[This] is a lie and devoid of truth," said Mohamad Alloush, the faction's political chief, Reuters reported.

Russia's RIA news agency quoted a Russian general staff official as saying rebel fighters with Jaish al-Islam in Douma have expressed readiness to lay down their arms and leave the town.

The official, Stanislav Gadzhimagomedov, said the group was in touch with Russian officers handling the negotiations and that the question of their departure was likely to be settled in the near future, RIA reported.

The evacuation is modeled on others in which rebels have surrendered swaths of territory around the capital and other major cities after years of siege and bombardment at the hands of President Bashar al-Assad's forces.

They have been helpless against the government's overwhelming artillery and air power, boosted with support from Iran's Revolutionary Guard and Russia's air force.

Rebels began evacuating another pocket of Eastern Ghouta on Thursday. Some 7,000 people left the town of Harasta, bound for the rebel-held Idleb province in northern Syria.

The Syrian regime is giving rebels and male residents the choice to put down their weapons and sign up for military conscription or to leave with their families to rebel-held territories elsewhere in Syria.

Tens of thousands across Syria have elected to leave with their families instead of serving in the army or risking arrest by the state's notoriously vindictive security services.

Critics say it amounts to forced displacement, and rewards brutal siege tactics that have deprived hundreds of thousands of civilians of food and medicine and subjected them to years of violence. United Nations inquiries and top U.N. officials have likened the tactics to war crimes and crimes against humanity.

The U.N. and the International Committee of the Red Cross have refused to facilitate the Eastern Ghouta evacuations.

As more than 105,000 people have been evacuated from the Eastern Ghouta, activists say the evacuees are suffering harsh humanitarian conditions in mass detention camps.

Thousands of people have been transferred to the Adra area northeast of the capital where the regime had placed them in its facilities amid an absence of most essential services, local activists and relatives said.