The Turkish forces were preparing to set up observation points, Al-Etihad Press reports 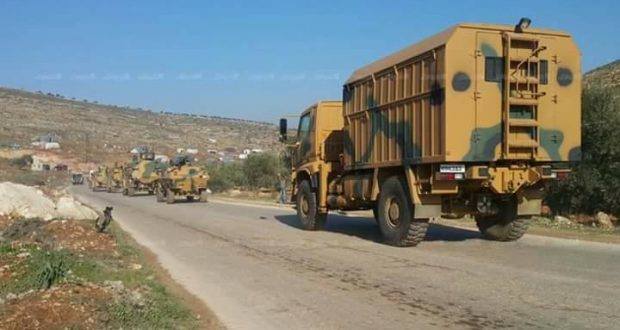 Turkish army reconnaissance units on Monday entered the southern Idleb countryside and northern Hama countryside and carried out a scouting tour in preparation to set up new observation points in the area.

Sources on the ground said that a Turkish convoy entered the Khan Sheikhoun area in the southern Idleb countryside in a reconnaissance mission before establishing new observation points, adding that the convoy was accompanied by reconnaissance planes and some rebel groups operating in Idleb.

The sources added that the convoy carried out reconnaissance of the area and should leave in the coming hours through the Kafr Lousin crossing in the Aleppo countryside for Turkish territory.

They said that the convoy was in the Al-Khazanat area in Khan Sheikhoun and then scouted from the Telaas area south of Idleb, then heading to the town of Kafr Zeita in the Hama countryside, and are expected to head to the Al-Latamana area in northern Hama as well.

Residents of the town of Al-Sarman in the southern Idleb countryside had gone out in a protest in front of the Turkish observation point, demanding that the Turkish army expand and speed up deployment of observation points in the area and cut the route off for regime forces, who have tried from time to time to advance in the area.