Ongoing siege has led to lack of food, medicine and vital life lines 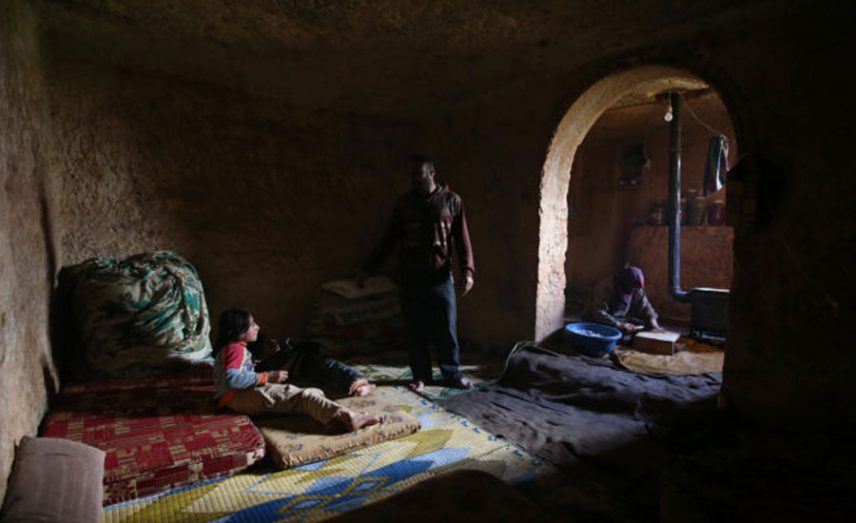 Obeida Abu Khazima, an activist in the southern Hama countryside, says that the town of Aqarib suffers day after day from the worst conditions which humans can bear due to the siege by surrounding pro-regime villages which have closed the outlets for life and communication to the village’s people and prevented any humanitarian or medical aid in the town, which suffers from a scarcity of food.

This is accompanied but an almost complete absence of field hospitals and a lack of electricity and water has led residents to adopt primitive alternative means “as if they are in the Stone Age or earlier,” he said.

Abu Khazima told Sada al-Sham that the town and other towns of the southern Hama countryside and the northern Homs countryside suffer the same fate as the town of Aqarib. Some have obtained and have been able to bring in food through smuggling routes from regime areas by some means or another, at prices reaching as much as 20 times higher than their true price. The bread which might arrive has a price of up to 1,000 Syrian lira or more if it is available.

Residents have resorted to finding other alternative means to provide food by cultivating gardens with varieties of vegetables, but it is barely enough to feed a few families, in addition to the fact that “residents have been eating this food for six years,” while some have repeatedly tried to dig new wells to make up for water cuts by regime forces.

Aqarib in general is almost totally devoid of street life, as the regime bombardment barely stops, using all types of weapons — from rockets to air strikes, tank shells, snipers — and so walking in the town’s streets is a risk. Visits between friends happen at night when darkness covers the streets and alleys.
The number of families under siege in the town of Aqarib is around 127 families, after 80 percent of residents were displaced to the towns of the northern Homs countryside, which suffers from a siege worse than the siege of Aqarib, but is safer to a large extent than Aqarib.

“The displacement in these areas may protect you from dying by rocket fire or bullets but hunger and thirst will pursue you,” the activist says.

Protection from the continuous bombardment is a fact of life for residents in the southern Hama countryside. Media activist Hassan al-Amari says that Aqarib residents have dug large holes underground at a depth of about three meters, equipped with simple means such as candle lighting and some blankets to prepare them, including whatever food and drink is available, as the length of stay in these shelters could be days and weeks when the pace of the bombardment accelerates — as happened last year when residents could not leave the shelters for more than 14 days in a row because of the intensity of the bombardment.

A field doctor in Aqarib who asked not to be named described the suffering inflicted by the lack of hospitals to treat wounded which meant that patients had to be transported to the town of al-Houla in the Homs countryside adjacent to Aqarib through a road running between them, with the process taking more than 15 minutes.

In addition, blood bags often lose their validity because of the lack of materials necessary to preserve them, and this means there must be donors available continuously, near the wounded, to ensure blood is provided immediately. The field hospital staff in Houla need new donors for each operation. Another problem in transferring blood to wounded is that identifying blood types can take a long time in the absence of advanced equipment, which forces workers to use primitive methods.

Finally, another problem confronts them which is that securing the necessary blood for the wounded of that blood type could require transporting healthy residents from other villages in to donate in the Houla hospital.