Scheme seeks to help reintroduce the children to education and integrate them into the city's schools, SMART reports 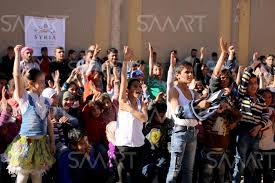 The local council in the city of Atarib, 30 km west of Aleppo city in northern Syria, on Wednesday set up an entertainment party for children displaced from the Eastern Ghouta of the capital Damascus, in cooperation with the Obeida Association and the Syria NuDay organization.

The director of the association, Mohamad al-Fajj told SMART that the party included 800 displaced children in the city’s shelter centers and included songs and distributing gifts and toys.

An official in the local council, Mustafa Abdel Qader, said that the aim of the party was to offer psychological support to the children and to prepare them to return to their educations and integrate into the city’s schools.

Syrian regime forces expelled more than 40,000 civilians and fighters from the Eastern Ghouta to Idleb and Aleppo in March after a massive military campaign carried out on the region, which led to the deaths and wounding of thousands of civilians and the destruction of infrastructure.