President tells a delegation that the unity of Muslims is the guarantee to protect against Western schemes, SANA reports 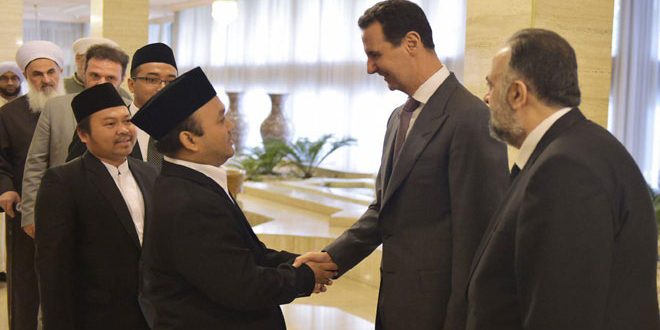 President Bashar al-Assad received on Wednesday a delegation from participants in the Unity of the Nation Conference, which was hosted by Damascus.

During the meeting, Assad said that the basic weapon employed by Syria’s enemies is spreading division, promoting extremism, and creating intellectual and religious schisms in society, stressing that “the unity of Muslims, which is based on diversity and adherence to the essence of the religion, is the guarantee to protect our communities against Western schemes aimed at weakening and dividing us.”

The president highlighted the importance of convening the Unity of the Nation Conference and the role of religious scholars in launching an open dialogue among them, particularly the major religious institutions, as well as among the youth and the public, pointing out that the root of the challenges that the Islamic nation is facing today is the attempts to separate national and religious identities and obfuscate the fact that our roots are one.

In turn, the delegation's members affirmed that the conference, having been convened in Damascus, came to confirm the stand of Islamic religious scholars and Muslim peoples alongside Syria, especially at this time when the Syrians are facing the American and Western threats with utmost courage.