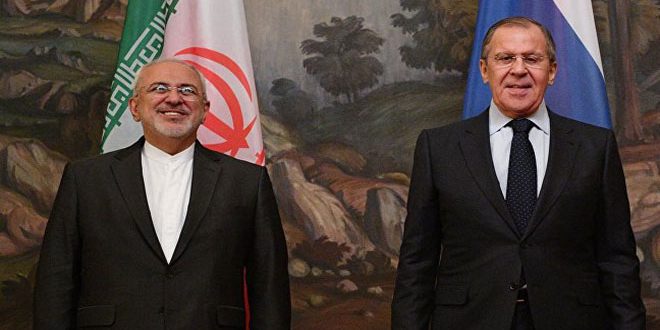 1. The foreign ministers of the Astana platform’s guarantor states confirmed in a joint statement following their meeting in Moscow on Saturday their agreement to increase efforts to reach a political settlement of the crisis in Syria as per U.N. Security Council Resolution 2254 and the agreements reached in Astana talks. The three foreign ministers – Russia’s Sergey Lavrov, Iran’s Mohammad Javad Zarif and Turkey’s Mevlut Cavusoglu – reaffirmed their determination to continue cooperating in order to eliminate the terrorist organizations in Syria, such as the Islamic State (ISIS), the Nusra Front and all other individuals, groups, and entities associated with Al-Qaeda or ISIS. They expressed their rejection of any attempt to undermine Syria’s independence, unity, territorial integrity and sovereignty, and they also underlined their determination to face any similar agenda under the pretext of combating terrorism. [Source: SANA]

2. At least 20 people, including faction commanders, activists and army defectors, have been killed in the past 48 hours by assailants in the northern province of Idleb, a local reporter said Friday. Medics told Zaman al-Wasl that five civilians were killed by an improvised explosive device near the village of Ber al-Tayyib, northwest of Idleb city. More victims fell Friday in the mounting assassination attacks in the towns of Al-Nairab, Khan Sheikhoun, Saraqeb and Jisr al-Shughour. The wave of assassinations has reflected the deteriorating security condition in a territory controlled by former Al-Qaeda group Hay'at Tahrir al-Sham. [Source: Zaman al-Wasl]

3. Media sources said Saturday that Turkey had forced the front of the victory in northern Syria to one of two options: "war or self-resolution." Ankara, which is under considerable pressure by Russia and Iran, has summoned to Istanbul leaders of the Nusra Front and asked them to choose between war and resolving itself. Turkish President Recep Tayyip Erdogan pledged to make the city of Idleb a safe area along with Tel Rifaat and Manbej, Ayn al-Arab (Kobani), Tel Abyad, Ras al-Ayn and Qamishli, in order to allow the Syrians to return to their areas. [Source: Al-Aray al-Jadeed]