Wares spilling out onto the pavement has become too much for the governorate, Al-Watan reports 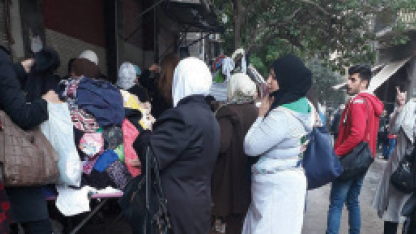 The Damascus governorate has issued a strongly worded warning to used clothes shops in violation in the Al-Qanawat area in the capital's center, while closing 17 used clothing shops on Khalid bin Walid Street because of their violations and working on the pavement.

In a statement to Al-Watan, a member of the executive office in the Damascus governorate, Ammar Kilaou, said that members of the Al-Qanawat services department and the police had carried out a campaign against the stores based on incoming complaints because of their use of the sidewalks, adding that there was a precautionary seal on the shops for three days.

The Damascus governorate executive office member noted that the seal was temporary and that the shops would not open until giving a notarized view not to continue the violations and use of the sidewalks.

In the event that the violation continues, the closure period will be extended. And if the violations continue a number of times, the store will be shut conclusively and would not be opened except by a decision from the Damascus governorate.

Kilaou noted that the campaigns against the sidewalk usage were ongoing in all parts of the capital to end the violations being committed, working based on decision issued by the Damascus governorate.

For his part, the head of the services department in Al-Qanawat, Nidal Hafez, said that the closure decision was precautionary, which the services department carried out last Thursday after a large number of complaints issued against the used violating clothing shops in the area and their exceeding the spaces allotted for them.

This led to the closure of more than 17 shops, with punishments being increased in the event that the violations continued.

This coincided with a campaign to close shops selling clothes by the Damascus governorate, with members of the customs confiscating quantities of used clothes in the Al-Qanawat area.

It seems that there is a game of cat and mouse still underway between the Damascus governorate and those carrying out the violations in light of the absence of preventative measures issued toward the violations and infringing on the sidewalks and various uses amid a clear challenge to the decisions which have been issued, with violations expanding with no clear resolution or serious solutions for this matter.

Al-Watan carried out a tour of the Al-Qanawat area in which it became clear that all the used clothing shops are still closed in the area. They are expected to begin work again today, while what is strange about the issue is that the decision to shut them came during a holiday period, noting that the presence of used clothing sellers is devouring the sidewalks facing the closed stores amid major demand from residents to buy used clothing, which they say is cheaper and of good quality, and draws many residents throughout the day in the centers where they are sold in the capital Damascus.

The used clothing market in Al-Qanawat has seen large daily demand from citizens from all parts of the capital. The market is one of the most attractive given the large quantity of clothes which are sold and the cheap prices, noting that despite a decision to ban imports of old clothes, the market is still continuing to today and has not stopped at all.