Many civilians and rebels had only just left their homes in Beit Sahm, Babila and Yalda, Zaman al-Wasl reports 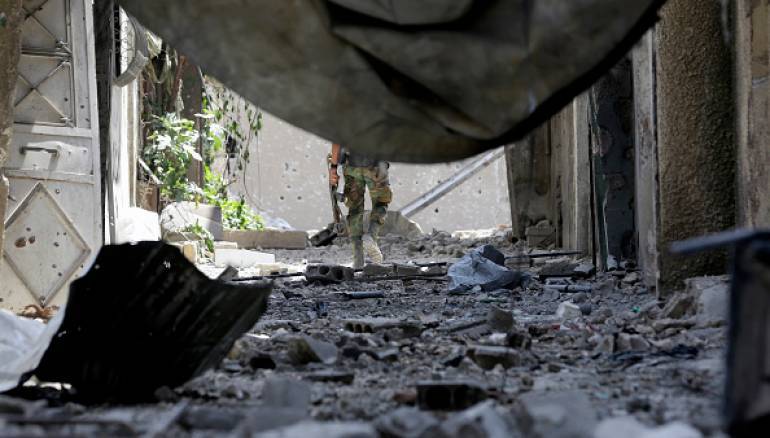 After forcing rebel fighters from their towns of Beit Sahm, Babila and Yalda in Damascus, the regime troops pillaged private property of the people who are sill on their way to northern Syria.

The fifth batch of southern Damascus evacuees left to northern Syria on Monday.

It was the fourth day of transfers for the towns of Yalda, Babila, and Beit Saham, from where around 5,000 people, including rebels and civilians, have been evacuated.

The war has been going President Bashar al-Assad’s way since Russia intervened on his side in 2015. From holding less than a fifth of Syria in 2015, Assad has recovered to control the largest chunk of the country with Russian and Iranian help.

A major bombing campaign that began last February ended the last remaining pockets of opposition resistance in the Eastern Ghouta, the biggest enclave around the capital, that had for years withstood a siege and successive army onslaughts.

The fall of the once heavily defended Ghouta demoralized rebels in other areas further east of the capital closer to the Iraqi border and in a southern Damascus pocket.

Now the only besieged area left is a small enclave in southern Damascus, where a few hundred Islamic State (ISIS) militants are making a last stand as aerial strikes devastate the once teeming major Palestinian camp of Yarmouk, Syria’s largest, and nearby Al-Hajar al-Aswad town, according to Reuters.

In the latest deal and in other areas, many have opted to stay and make peace with the army rather than leave their homes for an uncertain future in refugee camps in northern Syria.

The opposition accuses the authorities of pushing demographic changes that uproot Sunnis.

The authorities deny this and say many civilians were held hostage by forces they call terrorists.