At a conference in Beirut the Grand Mufti of the Republic said that support of the Palestinians has cost Syria a lot, but that it was worth the cost SANA reports. 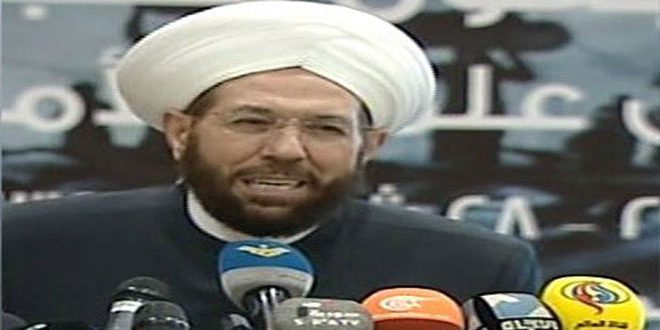 The Grand Mufti of the Republic Ahmed Badereddin Hassoun stressed that Syria has preferred to embrace the Palestinian resistance even if ultimately pays a high price for that support.

In a speech at a conference for the International Union of Resistance Scholars in Beirut on Monday, on the 70th anniversary of Palestinian Nakba, Hassoun said that Syria has always supported the resistance. He added that if Syria had given up this support, it would have become, economically, one of the pioneer states and because of this, the Islamic and Arab world need to realize the reality of the schemes hatched against them.

He added that 110 states have conspired to destroy Syria and that the repeated Israeli aggressions, which aims at preserving Israel’s use of terrorist organizations, is collapsing thanks to the heroism of the Syrian Arab Army that will continue its task of eradicating every last terrorist in Syria.

“Today we are standing before a dangerous turning point, as the Gulf regimes have granted jobs and citizenship to the Palestinians in exchange for forgetting their cause,” Hassoun said.

He added that whoever gives up al-Aqsa Mosque and occupied Jerusalem will give up Mecca.