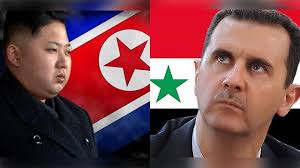 "I am going to visit the DPRK and meet… Kim Jong Un,” the North's state-run KCNA news agency reported.

The announcement came as anticipation mounts for a historic nuclear summit between Kim and US President Donald Trump in Singapore on Jun. 12, 2018, following a whirlwind round of diplomacy.

"The world welcomes the remarkable events in the Korean peninsula, brought about recently by the outstanding political calibre and wise leadership of… Kim Jong Un," KCNA cited Assad as saying during a meeting with North Korean Ambassador Mun Jong Nam on Wednesday.

Pyongyang and Damascus have maintained warm ties for decades, with the isolated communist republic reportedly propping up the Assad regime with weapons during the deadly seven-year conflict.

Suspicions over the trade of chemical weapons between Pyongyang and Damascus have been raised in the past by the UN and South Korea.