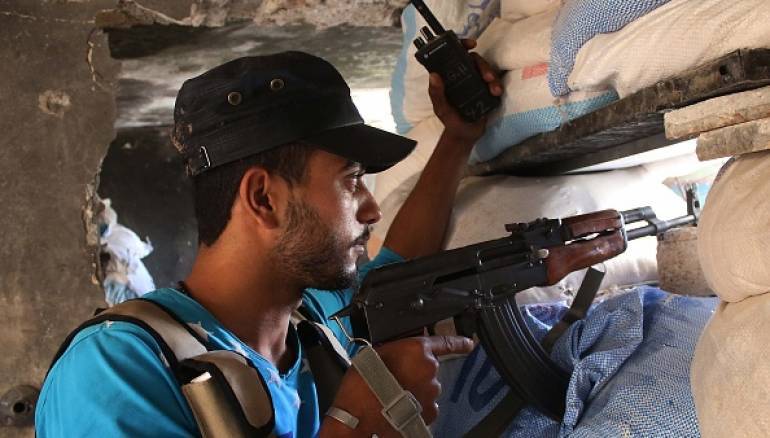 Key rebel factions in southern Daraa province have merged under one task command as the regime army mobilizes for a campaign to retake the area bordering Jordan and the Israeli-occupied Golan Heights, activists and rebels commanders said Wednesday.

Rebels have been on high alert as regime forces backed by allied militias have been mobilizing troops for a major offensive in southern Syria despite warnings from Washington.

The Central Task Room will unify military efforts against both the regime forces and Daesh, according to a statement posted online.

Field sources said the regime plans to seize the strategic hilltop of al-Harra in the western countryside as well to isolate rebels in al-Lajat region that lies on the border with Jordan.

On Wednesday, clashes erupted in the frontline town of Kafr Shams, near the Syrian-held Golan Heights, and further east in the town of Busra al-Harir, which was struck by dozens of mortars from nearby army positions, according to Reuters.

Regime-run media has accused rebels of escalating attacks on civilians in the area which is part of a "de-escalation" zone agreed by the United States and Russia last year with the aim of containing the conflict in the southwest.

An offensive in the southwest would risk a major escalation. The area is of strategic importance to Israel, which is deeply alarmed by Iranian influence in Syria. Washington has warned it will take "firm and appropriate measures" in response to violations of the "de-escalation" deal.

U.S.-allied Jordan is increasingly worried about a spillover of violence and has been stepping up diplomatic efforts to preserve the de-escalation zone which it also helped to broker last year, a Jordanian source said.

Rebels say Iranian-backed fighters allied to Bashar al-Assad have boosted their numbers in the area, though a commander in the regional alliance fighting in support of Assad denied Tehran-aligned forces had a big presence there, Reuters reported.

Elite regime troops known as the "Tigers", which spearheaded the campaign that recaptured eastern Ghouta have also been mobilized for the attack.

The pro-Damascus newspaper al-Watan said there were "growing indications about preparations for the start of a wide military operation to liberate" the south.

One major objective for the regime is recapturing the border crossing with Jordan. Before the conflict it served as a vital trade gateway for goods moving across the region. Its closure has hit both the Syrian and Jordanian economies hard.

Residents and opposition sources say that they saw increased movements of troops with armored vehicles and tanks along two main highways that cut through rebel areas.

The last two days have seen wider skirmishes, an airstrike and rebel ambushes along two main highways being used by the army to reinforce the city of Daraa, which is split into areas controlled separately by the government and rebels.