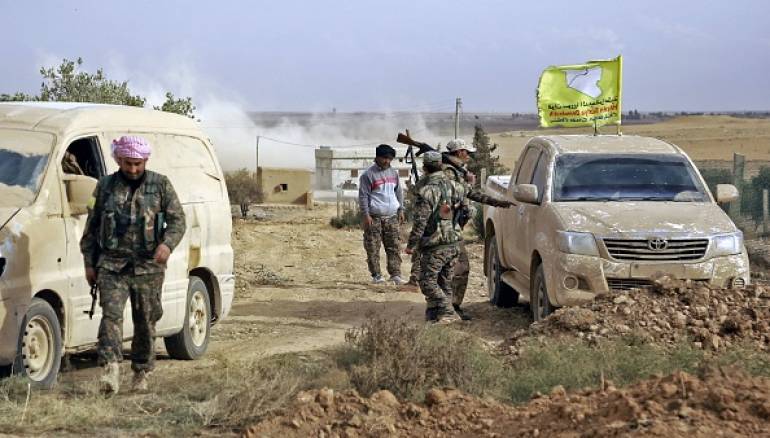 The attack targeted the Kurdish Women's Protection Units (YPJ) in the town of al-Jerzi, four days after an ambush killed two fighters from the Syrian Democratic Forces (SDF) on the eastern side of Euphrates River.

Three more SDF fighters were killed on Monday in a similar attack in the town of al-Huwaij, according to activist Taj al-Allow.

Five towns are still under Islamic State (ISIS) control on the eastern side of Euphrates River. The tiny territory has endured a major offensive by Kurdish forces since June.

The SDF, backed by the US-led coalition airstrikes, reached the town of al-Hajeen this week. Senior ISIS fighters have withdrawn to the town of Almuhassan.

The YPG-led forces have also made gains against ISIS east of Markada town, taking three villages.

The SDF, which the Kurdish YPG militia spearheads, has been the main partner of the US-led coalition against Islamic State in Syria, helping drive the jihadists out of swathes of northern and eastern Syria last year.

Also in Deir ez-Zor, the SDF have freed 114 people in eastern Raqqa province after one month in detention, local activists said.

Most of the freed people were civilians along with fighters from Thuwar al-Raqqa, the rival group to the US-backed SDF, according to Raqqa-based activist Muhab Naser.

Over the last four weeks, at least 200 tribesmen, mostly from Thuwar al-Raqqa, have been arrested by the SDF.

Last Saturday, the SDF freed 20 women  who had been arrested in Raqqa city after they protested to get their husbands freed, local reporter said.

The Kurdish-led forces, according to the leading civil group Raqqa Is Being Slaughtered Silently, beat the freed women. They rallied in front of Asayesh prison to demand the release of their husbands and relatives after the death of rebel fighter in the same prison.