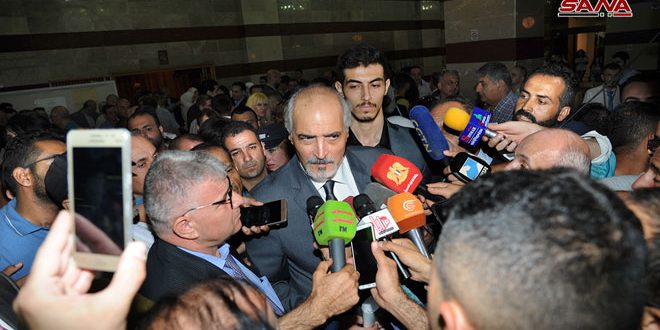 On Sunday, Syria’s Permanent Representative to the UN, Dr. Bashar al-Jaafari stressed that the Syrian state supports the return of all the displaced Syrians to their villages, cities and homes.

Al-Jaafari’s remarks came in a press conference on the sidelines of a lecture delivered at the 30th International Book Fair under the title “The UN and the Syrian Crisis .”

Al-Jaafari noted that the return of displaced Syrians is not only related to the Syrian Government, but it is also related to many the states which imposed “unilateral coercive economic measures” on the Syrian people and which are not based on a resolution by the International Security Council.

He indicated that if these measures are lifted, this will alleviate the pressures on the economic and social levels in Syria.

Answering a question on the latest developments of the Chinese role, al-Jaafari said that China has an effective and key role not only in solving the crisis in Syria, but also as permanent state on the Security Council, and constitutes a significant part of the decision making mechanism.

He added that China is a principled ally and its diplomacy works according to certain principles and this is unique in the world nowadays.

In his lecture, Al-Jaafari talked about the establishment of the UN and Syria’s role in its establishment, and its effect on the crisis in Syria.

He also talked about the historical use of the veto at the Security Council, which the US first used against Syria in February 1946.

Al-Jaafari indicated that during the years of the crisis, Russia used the veto against Western and Arab draft resolutions against Syria eight times and China used the veto four times.

He added that the Security Council hasn’t adopted any presidential statements regarding the crisis in Syria and it has failed in adopting press statements due to Western objections to their content such as the draft resolution which condemns the targeting of the Russian Embassy in Damascus by terrorists.

He stressed that 800 letters documenting what has taken place in Syria have been sent to the Security Council and to the member states on behalf of the Syrian Arab Republic.

Dr. al-Jaafari also talked about using chemical weapons as an additional tool to put pressure on the Syrian state and to internationalize the crisis.

He concluded his lecture by affirming that Syria, despite their battle against terrorism and its international backers, has triumphed in the face of an unprecedented international alliance.