The Independent has published an interview with Syrian Deputy Foreign Minister Faisal Mekdad. Below are excerpts of the interview 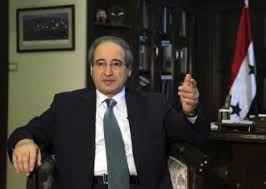 Syria is convinced the US cannot control the rebel groups it is arming and will be unable to get them to declare a ceasefire that would be central to any successful peace talks, says the country’s Deputy Foreign Minister. This puts a further obstacle in the way of negotiations in Geneva proposed by the US and Russia which seem the best chance of ending the Syrian civil war. It now appears they will either not take place, or if they do, they will achieve nothing.

Faisal Mekdad says in an interview with The Independent in Damascus that the Americans “provide arms and money but they have absolutely no control. Nobody will listen. The US has been trying to unify this opposition for two years and you can see the results: more disintegration.” Mr Mekdad has been at the centre of Syrian foreign policy at a time when the country has been progressively isolated, while still managing to retain crucial allies.

Mr Mekdad looks more confident and relaxed than he did six months ago, probably reflecting a Syrian government belief that it has survived the worst of the crisis. A dapper, fast-talking man, Mr Mekdad comes from Daraa in southern Syria where the uprising began two years ago.

Mr Mekdad says events have been moving in the Syrian government’s favour throughout the first half of the year. Its forces are on the offensive, having won a crucial battle at Qusayr outside Homs near the Lebanese border, and he stresses that the opposition should take heed. “It will send a clear message to armed groups, saying: ‘The Syrian army is coming for you,’” he says.

At the end of the interview Mr Mekdad commented that six months earlier Damascus had been resounding with the sound of artillery fire while now it is much quieter. In reality, this is not quite true and there is the constant boom of outgoing artillery and the occasional sharper crack of incoming fire from rebel mortars.

Mr Mekdad does not look overly concerned by the postponement of the Geneva II peace conference, saying that Syria had always been ready and willing to attend without preconditions. But he goes out of his way to refute the idea that, if the US and its allies could make the rebels a bit stronger on the battlefield, “they can force the government to give more concessions. This is completely wrong,” he says.

This is the argument of David Cameron and William Hague, who claim arming the rebels would tilt the balance of the war in their favour forcing Mr Assad to negotiate his own departure. “I think they are stupid,” says Mr Mekdad. “I think they are absolutely mistaken. More arms means more killing.”

Mr Mekdad denies that Iran has a single soldier or member of the Iranian Revolutionary Guard Corps in Syria, but adds that the Iranians are generous with economic and financial assistance.