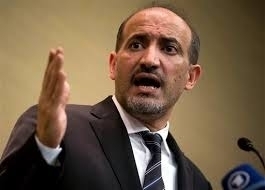 Syrian National Coalition president Ahmed Al-Jarba has issued increasingly impassioned calls for the West to arm the opposition Free Syrian Army (FSA) over the past year—and in exclusive comments to Asharq Al-Awsat on Wednesday, he announced that this could finally happen within a matter of weeks.

“The issue of [the West] assisting the opposition militarily by providing us with sophisticated weapons will be translated . . . on the ground in the coming weeks,” Jarba said.

The Syrian National Coalition president’s comments come following recent visits to the United States, France and Britain, and following the London meeting of the Core Group of the Friends of Syria earlier this month.

At that meeting, the Core Group pledged to take “further steps together through a coordinated strategy to increase our support for the moderate opposition National Coalition, its Supreme Military Council and associated moderate armed groups.”

Jarba told Asharq Al-Awsat: “We knocked on the door of the US administration, the US Congress and the American media” to ask for arms. “Compared to our direct contact with the Americans last year, these [latest] meetings were positive . . . and I can at this point tell you that we have certainly made advances” toward securing arms.

Responding to US fears that Syria has become a haven for foreign extremists and that any arms could end up in the hands of militant organizations, Jarba said: “I told them that we do not want your children to come to Syria [to fight] or for your air force to carry out any strikes. What we want is arms to defend ourselves from [the Assad regime's] air raids and barrel bombs, while we at the same time support a political solution. We can only reach such a resolution by convincing Bashar Al-Assad that there is no military solution to the conflict, and that is why you must provide us with substantial military assistance.”

“I have truly sensed that there is real seriousness that this will take place in the coming days, which will be translated . . . on the ground in the coming weeks.”

The Assad regime has secured a number of victories against the ailing Syrian opposition in recent months, restoring its control of the Syrian–Lebanese border region and cutting off anti-Assad rebels from moral and material assistance from across the border. Earlier this month, Damascus also recaptured the city of Homs, strengthening its presence in central Syria while rebel forces are increasingly fragmented and disjointed, increasing calls for the West to provide the “moderate” Syrian opposition with arms to allow them to push back.

As for whether Washington has been convinced by Syrian National Coalition “guarantees” that arms will not end up in the hands of Islamist rebels, including the Al-Qaeda-affiliated Al-Nusra Front and the Islamic State of Iraq and Syria (ISIS), Jarba pledged that this would not happen.

“We explained our guarantees to them and they were convinced by these guarantees. You know that their argument [for not providing arms] is that they could end up in the ‘wrong hands.’ We reject terrorism and are fighting against it on the ground . . . So it would be impossible that these arms would end up in the hands of those we are fighting,” Jarba said.

The Syrian National Coalition president, who was re-elected as head of the main Western-backed opposition umbrella group in January, said he did not intend to seek a third six-month term in office. He told Asharq Al-Awsat: “We have a system that stipulates that a presidential term in office lasts for six months and can only be renewed once. I have stood for office twice and succeeded both times. For me, my presidency of the coalition is over after one year.”

Jarba hailed the “unprecedented” political activity and practical steps the opposition coalition has taken under his leadership. “We have achieved important things, including participating in the Geneva Conference, as not participating would have been unacceptable. We have introduced a key element into the Syrian opposition, namely the Kurdistan National Assembly. My visit to the US was also historic and important by any standard, not to mention our attendance of the Arab League and the Gulf Cooperation Council [summits].”