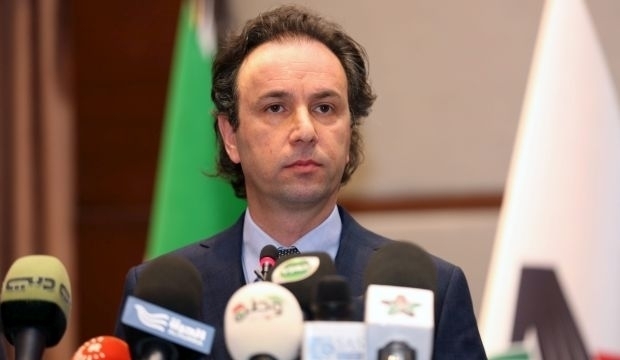 The president of the Syrian National Coalition Khalid Khoja said that opposition forces are not fighting Bashar al-Assad and his regime, but its main backer Tehran, dismissing the Syrian president as the “executive manager” of Iranian interests in Syria.

In an interview with Asharq Al-Awsat, the recently-elected Syrian opposition chief warned that the Assad regime had a hand in the emergence of the Islamic State of Iraq and Syria (ISIS) and other jihadist groups. Despite this, Khoja did not rule out a “political solution” to the Syrian crisis, but said that this would depend on the situation on the ground.

Khoja, head of the main Western-backed Syrian opposition umbrella group, also expressed his concerns over the “fragmentation” of Syria, stressing that only a “revolutionary” government could hope to guarantee Syrian unity in the years ahead.

Asharq Al-Awsat: How do you assess the last four years of the Syrian crisis?

Khalid Khoja: In the beginning, many countries thought the [Syrian] revolution was [a source of] chaos. The Syrian regime promoted this view and managed to convince the international community and the region that the revolution represented chaos while it [the government] represented stability. Major mistakes have been made by the revolution and the countries backing it—something that has benefited the regime. But today we find that the international community and regional countries have realized that the regime is the real reason for this chaos and terrorism. It released from prisons, and now controls [members of] ISIS, the Nusra Front and other extremist jihadist groups. We are now facing the challenge of convincing the international community and the region that if the revolution is victorious, it can achieve stability in the region—the entire region. If a person like Bashar al-Assad—a delusional madman—remains in power, chaos will continue.

Q: What conclusions have you drawn over the last four years?

The challenge that we—the political opposition, the Free Syrian Army (FSA) and civil society activists—are facing today is to prove that the Syrian people are united and acting as one hand. Therefore, the Syrian National Coalition has to restore the prestige of the opposition and prove that we can run Syria’s liberated areas with the mentality of a state, not as groups or organizations. We must also prove that the FSA can operate as a military establishment following the rules of accountability and chain-of-command in the same manner as regular military forces.

On the regional level, we recently saw a rapid decline in oil prices and Assad’s biggest international backers—Iran and Russia—are now feeling the strain. Russia has the problem of Ukraine and of having to constantly provide the regime with weapons and military equipment. While Iran, after its expansion into a large geographic territory—including Yemen, Iraq, Syria and Lebanon—and the tensions this has caused in some Gulf states, along with the declining oil prices, is also feeling the burden.

Q: What political solution, if any, can be reached to resolve the deteriorating situation in Syria?

When we talk about a political solution we must think about the situation of our people on the ground. There are major challenges standing in our way in terms of the delivery of services to besieged or liberated areas. The regime only controls around 40 percent of Syrian territory and the capital Damascus.

But Syria unfortunately seems to have been fragmented into different “cantons.” The south is completely separated from Damascus and run by several FSA factions. While the north has been divided into three sections: the northeast [Raqqa, parts of Deir-ez-Zor, Abu Kamal and parts of Hasakah] is under the control of ISIS; Aleppo and some parts of the northwest are under the control of the FSA; and 70 percent of Idleb is under control of the Nusra Front. These cantons change hands constantly.

Q: In light of this state of fragmentation, aren’t you concerned about the integrity of Syria? Will fragmentation become a reality in Syria?

The game of fragmentation was started by the regime the moment it brought foreign militias from across the world onto Syrian soil. When FSA personnel arrest [government] fighters, they find that they are wearing the official uniform of the Syrian army but cannot speak Arabic. They are Afghans, Pakistanis, Indians, Koreans and Iranians. This is not to mention those who came from Iraq and Lebanon as well as some Shiite militants from the Gulf. But this is just a temporary situation. The regime will not be able to get out of its predicament through a strategy of maintaining control over some parts of Syrian territory .. in exchange for allowing the remaining areas to be controlled by other forces. We—as a coalition that brings together the majority of the Kurdish, Assyrian, and Turkmen political factions as well as forces from the political left-wing, right-wing and Muslim Brotherhood, among others—will not allow this to happen. Neither will the political or military opposition, which continues, until now, to oppose the regime—with the exception of the [Kurdish] People’s Protection Units (YPG), which sometimes acts on behalf of the regime in the north. Apart from this, I assure you that all the opposition unanimously agree that post-Assad Syria will remain united.

Q: How long do you expect the Assad government to endure?

I do not think we are fighting Assad in Syria; we are fighting Iran. Assad is just the executive manager of Iranian interests [in Syria]. But Iran no longer has the ability to endure in Syria. The time will come when it abandons Assad as it previously did with Nouri al-Maliki in Iraq.

Q: Does your presidency of the coalition mark the beginning of Turkish dominance of the Syrian opposition?

Replacing political alignments with consensus within the coalition has been the watchword of my presidency so far. In fact, I did not nominate myself until the morning of the elections. The nominee for the post of president [of our bloc] was initially current Secretary-General Yahya Maktabi while the candidate for the post of Secretary-General was Riyadh al-Hassan who was running against another candidate from the Muslim Brotherhood. Although I am of Turkish origin, members of the Kurdish National Council were among the first to suggest I head the coalition. I am not the candidate of Turkey, or any other country.