Conference will aim to agree on the number of military council members and the size of opposition groups' representation, says Coalition representative 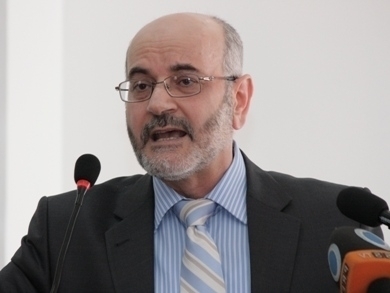 The general-coordinator for the committee overseeing the formation of the Free Syrian Army’s new Supreme Military Command, Haitham Rahmeh, revealed in an interview with Madar al-Youm that a conference will be held in October gathering all military factions involved in the Command’s formation.

"We worked over the past months to reshape the military council, and after communicating with military factions in various Syrian provinces, we decided to hold a conference for those factions which will decide the shape and mechanisms of the Military Council, as well as the number of its members," Rahmeh said.

Rahmeh confirmed that factions sending delegates to attend the conference will agree on the number of council members and the size of representation. Rahmeh explained that the current idea is that every 1,000 fighters – for example – will be represented by a delegate in the new Military Council. The notion is problematic, he says, as there are large factions with over 3,000 fighters, while there are small factions that have only a few hundred fighters. Rahmeh said that it was suggested smaller factions could elect one representative to be their delegate to the Council.

"On this basis, we communicated with the troops on the ground, for example: the First Army and al-Yarmouk in the south of Syria, the Army of Islam and Ajnad ash-Sham in Damascus, the Corps of Homs and Jaish Tahrir Homs in Homs, and other formations in Hama and Idleb, as well as large and small Turkmen factions, and some Ismaili forces,” he added.

Rahmeh expressed his hope in communicating with the emerging Druze force, stressing that they do not currently have actual military forces, but there is a core to form such forces. "We have dissident Druze officers within the project," Rahmeh said.

Rahmeh stressed that the committee has tried to include all sects in its communication, including Alawites.

"All the military factions in the Southern Front had agreed to join the project, including the operations room. We also received several responses from the factions in Damascus, Homs, Hama, Idleb, the coastal regions, Aleppo and Deir-ez-Zor. The factions in in the liberated areas in Deir-ez-Zor are undergoing training courses within the US-backed program. During the conference, the committee will provide a full explanation regarding the details of its work, the communications it carried out, the responses it has received and the differences and the problems encountered," Rahmeh said.

Regarding the main problems faced by the committee, Rahmeh said: "Some problems were related to the restructuring of the Coalition, the reform in the Coalition itself, although it has nothing to do with our work."

"We were very clear with the military factions we met, where everyone agreed to be partners in the new Military Council, which will be the military wing for the Coalition. We didn’t face any problem with these factions, except for one faction which refused to recognize the Coalition as a political umbrella for the Syrians," Rahmeh confirmed.

Rahmeh concluded that the more the Movement presents itself as a civilized actor, the less it will face unfair pressure. "I think that their negotiations with the Iranians and Hezbollah will give them a good chance to introduce themselves as a civilized faction. We wish them success in this mission," Rahmeh said.