During a tour in Old Damascus, president Assad attempted to polish his image as a humble president close to his people, according to al-Modon. 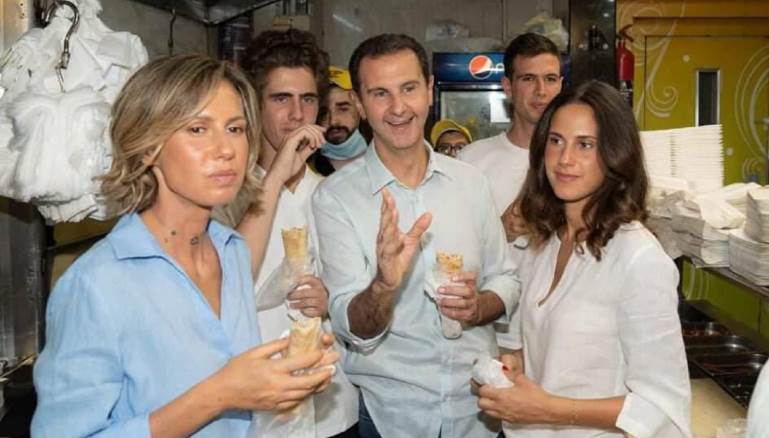 “Modest” and “without needing security”: In these words, supporters described Syrian President Bashar al-Assad, who appeared in a tour of in old Damascus streets with his family. Assad was offered shawarma sandwiches, surrounded by his supporters and photographers.

Assad, who delivered his inauguration speech at the People’s Palace hours before he toured Damascus, celebrated his re-election in a populist manner. He tried to appear among his followers to project the image of a humble president, not worried about security risks and connected to his people with whom he shares street food.

Yet this image, a provocative one for Assad’s opponents ten years after the beginning of the revolution, quickly shatters. Opponents said that Assad spoke rudely during his speech on Saturday, given that its content is “contrary to reality”.

These dissidents say that Assad is trying to engage loyalists with contrived displays of modesty, and notions of his family’s bond with the Syrian people. At the same time, he and his family live in a different world, which positions them far from the majority of Syrians, who are suffering from hunger and poverty, as they await help to continue living.

This perspective moves across political opinions, in the light of reports of poverty and desperation among the Syrian people. It is these images that loyalists are keen to avoid. The content published by loyalists indicates that they are convinced that Assad is one of them: otherwise, the argument follows, why would Assad’s family accompany him in central Damascus neighborhoods?