Wheat supply falls dramatically as a result of disputes between warring groups and drought, according to Athr Press. 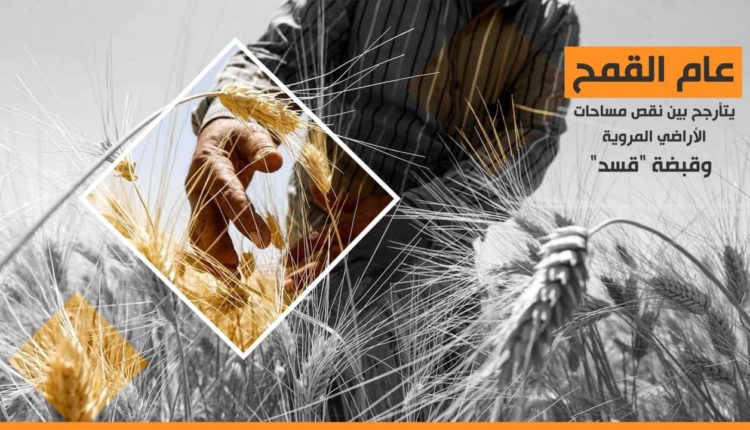 In Syria, control over wheat-producing areas is split between the Syrian state, the Syrian Democratic Forces (SDF), and Turkish-backed armed groups. Most SDF forces compel farmers to sell their crops to their centers exclusively in the countryside of Hassakeh, Raqqa, and Deir-ez-Zor, the most important agricultural regions in the country. The SDF also prevents trucks carrying wheat from reaching Syrian government centers.

At this time last year, the Syrian Grain Establishment in Qamishli received 10,000 tons of wheat. This year, as explained to Athr News by Abdullah Abdullah, the director of the Organization, the Livestock Corporation produced only 418 tons. No farmer managed to deliver crops to government grain centers because the SDF prevented the movement of trucks.

Abdullah added that the Ministry of Agriculture estimates that 300,000 tons of wheat exist outside state-controlled areas, and it does not expect to increase the amount received previously. This is especially true because of the weak harvest season, owing to the drought, as well as the SDF blocking any crops from reaching the institution. Abdullah pointed out that, in previous years, production used to be been between one and two million tons.

Nevertheless, Kurdish sources also claim that the SDF have not received more than 20 thousand tons of wheat. This has occurred despite the price of wheat per ton reaching 1.150 million Syrian pounds. In fact, wheat traders purchase it at the price of 320 USD per ton. This wheat is then smuggled into northern Iraq and areas controlled by the Turkish occupation forces, from the countryside of the Hassakeh and Raqqa governorates. The global price of wheat stands at around 600 US dollars per ton.

In the Raqqa governorate, the situation is relatively different. In the government-controlled countryside, 40,000-45,000 tons of wheat should be received through the Syrian Grain Establishment, according to George Kubba, a director at the establishment, in comments made to Athr Press. On May 25th, the organization received more than 9,000 tons, and the daily receipt rate began to increase and is expected to reach 1,500 tons per day until the season’s end. Last year, the total amount received was 27,237 tons.

The areas planted with irrigated wheat in the countryside of Raqqa, which are outside the state’s control this year, are controlled by two groups. The part of the land controlled by the SDF has not produced more than 15 thousand tons of crops so far. The margin of production in these areas is estimated at 250 thousand tons. Turkish forces occupy land in the northern countryside (Tel Abyad and its surrounding). The crop production in this land will not exceed 35 thousand tons at best. Traders in these areas buy a ton of wheat for about 300 USD to smuggle it to Turkey later.

According to comments made by private sources to Athr Press, the government estimates that this year, the production of irrigated wheat in the Hassakeh governorate will not exceed 300,000 tons, compared with 850,000 tons of wheat last year, despite fires that affected more than 35% of agricultural areas before the wheat’s harvesting.