Russia’s special envoy for Syria has conducted a secret meeting with Assad and “guarantors” of the Astana process, according to Asharq al-Awsat. 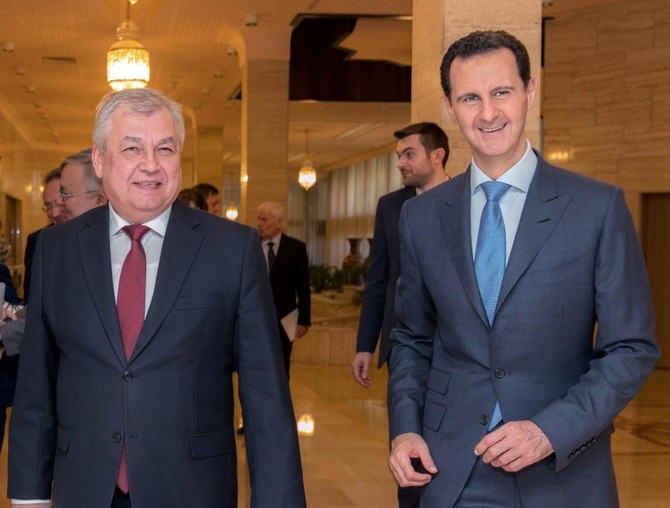 The Kremlin’s special envoy for Syria Alexander Lavrentiev, who frequently travels to Damascus, carried out a secret visit to the Syrian capital at the end of last week. Accompanied by “senior generals,” he met with president Bashar al-Assad, but why didn’t Moscow announce such a trip?

The obvious reason was because the Syrian Constitutional Committee was meeting in Geneva and because Damascus and Moscow are still trying to bridge the divide between them. The deeper reason has to do with the understanding in the Idleb province and ensuring that they hold amid the deteriorating military situation in southern and northeastern Syria. It is imperative that the ceasefire hold with the arrival of Joe Biden to the White House and as Syria prepares to hold presidential elections in July. Russia strongly supports the elections and wants it to serve as a turning point for Damascus’ ties with other countries.

After meeting Assad in Damascus, Lavrentiev headed to Geneva to follow up on the Constitutional Committee talks. He also met with the “guarantors” of the Astana process and the United Nations envoy to Syria Geir Pedersen.

The guarantors – Russia, Iran and Turkey – appeared to be on the same page regarding the developments in the war-torn country. Their assessment of the Constitutional Committee talks was the same, with the three countries emphasizing the need that they continue despite the slow pace of work and failure to reach a breakthrough. They stressed the need to commit to this “political accomplishment,” refusing to set a timeframe for it to complete its work. The process, they said, is a purely “Syrian affair led by Syrian figures.”

Before their meeting, the guarantors assessed the results of the fifth round of the five-day constitutional talks, which amounted to a “cultural seminar” and not political negotiations, which are their main purpose.

The government delegation continued to stall by demanding “more discussions and preparations” before beginning to “draft the constitution.” It sought more talks on sovereignty, Syria’s borders, national symbols, Arabism, a secular state, decentralized governance and a stance on “Turkish and American occupation.”

The head of the opposition delegation, which lost its Moscow and Cairo platform representatives, had traveled to Geneva with the conviction that talks would get underway over the drafting of the principles of the constitution and reaching an agreement on the work mechanisms of the future committee talks.

Pedersen watched the disputes unfold, relaying his observations to the guarantors. At the end of the committee talks, he frankly spoke to the media about his disappointment with their failure to make any progress. The envoy, who is known for choosing his words well, was on the verge of openly blaming the government for the failure. Both delegations submitted documents with their proposals, with the government representative rejecting the opposition’s suggestions, to the envoy’s dismay.

Significantly, Pedersen did not set a meeting for the next round of committee talks. Rather, he opted to omit the date in an effort to exert some pressure on Moscow and Damascus to reach a “complete deal” that includes a date for the next round, work mechanisms, the drafting of the constitution and coordinating stances between the government and opposition delegations.

Lavrentiev, meanwhile, was observing the widening gap between Syrian parties and the rapprochement between the three guarantors. He is aware that France is seeking to declare the failure of the Constitutional Committee and that the Biden administration is pushing for achieving political legitimacy to its Kurdish allies. He is also aware of the pressure being exerted on Pedersen to explore new options to implement UN Security Council resolution 2254. Damascus was supposed to play a more cooperative role, at least on the surface, which prompted his visit to the Syrian capital. The trip, however, was also related to developments on the ground and gains sought by the Russian army.

The frontlines remain unchanged in Idleb due to the understandings between Moscow and Ankara, but three fronts are heating up in other parts of Syria: Daraa, Suweida and Hassakeh.

In the western Daraa region, generals at Russia’s Hmeimim airbase attempted to mediate between the local negotiations committee and the Fourth Armored Division, of Bashar’s brother Maher, to reach an understanding that would avert a military operation against Tafas. Talks have stalled and deadlines have ended to reach an understanding in a region that is subject to the 2018 American-Russian agreements, with Israeli approval. These agreements were drafted by officials from the Barack Obama administration, and who are now part of Biden’s administration.

The predominantly Druze region of Suweida, meanwhile, is no stranger to tensions. This is the first time however that its grievances are so openly laid bare. Reports have said that head of the military security branch, Louay al-Ali, had insulted Druze spiritual leader Bahjat al-Hajri. Other reports said that Hajri had demanded an “official apology” and Ali’s dismissal. Another significant report said that Hajri and Assad had also held talks. That report was not officially announced, but pro-Damascus media confirmed that “Assad had inquired about Sheikh Hajri’s health, underscoring national unity.” He was also quoted as saying that the “offender only represents himself.” Ali was later allegedly sacked and replaced by Ayman Mohammed.

None of these developments were officially declared. Local sources in Suweida said that these issues go beyond the province’s borders. They explained that Damascus’ seeming “leniency and exposure of the tensions was prompted by Russia in an effort to win over the residents and factions of Suweida and steer them away from Iran and Hezbollah’s influence.” Tehran and the party are trying to impose their presence in the area, which diplomats believe will harm the greater picture in terms of relations between Washington, Moscow and Tel Aviv in their approach towards Iran.

In the northern Hassakeh region, tensions are high between the forces of the Kurdish autonomous administration and the regime. The Kurdish forces have surrounded Damascus’ troops in the “security zone” in Hassakeh, prompting the regime to retaliate by surrounding Kurds in Aleppo and Qamishli.

The Russian officers in Hmeimim again intervened to contain the tensions. They achieved some breakthroughs by persuading both sides to carry out a prisoner swap. However, tensions continue to persist. Taking in the broader picture, the situation in Hassakeh will weigh on relations between Moscow, Washington and Ankara. The situation does not bode well for Turkey because Biden has appointed officials to his administration who sympathize with the Kurds, have been hurt by Russia and are suspicious of Ankara.

Western officials believe that the above mentioned issues were on the table during the Syrian-Russian talks. Some were addressed during Lavrentiev’s visit. Damascus, meanwhile, continues to escalate its rhetoric against the Kurdish Syrian Democratic Forces and western sanctions as it prepares to hold the presidential elections in the summer. At the same time, it is mending relations with its “old allies,” demonstrated in Foreign Minister Faisal al-Mekdad’s telephone talks with his Chinese counterpart, Wang Yi, and the condemnation of the “illegal economic sanctions.”