Syrian have been shocked by a video of a young girl and her dying father, who were denied admittance to a hospital in Homs reports Etihad Press. 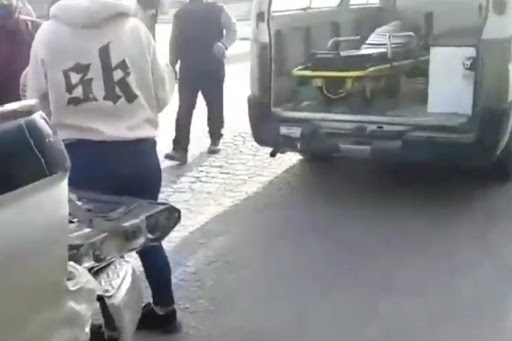 “Why wouldn’t they admit my dad to the hospital? He can barely breathe and he needs oxygen.”

This question was asked  by George Bitar’s young daughter, as she sat next to her father, who lay in an agricultural truck, whose driver brought George to a hospital in the town of al-Mushrifah in the Homs countryside. A shocked little girl deprived of the ability to analyze and dissect shock. Her father was sick and needed to go to the hospital. She wanted to do something, to scream at people, but she was confused. She looked at a young man filming with his phone and promising to publish the video for everyone to see. To her left is a group of health workers who are not doing anything to help her father.

An oxygen mask was enough to save George, but the instructions are strict. It is harsh to see someone dear to your heart not being admitted to a hospital because of a stupid, preventive protocol and a degenerate system that does not leave room for humanity and carries out orders like will-deprived people in denial.

The war that the regime has waged has been resulting in catastrophic outcomes since 2011 and has raised the “feeling threshold” for most Syrians. Pools of blood, deformed faces and bodies, disease, poverty, and homelessness. Their impact has become normal and their repercussions are deemed acceptable. Their impact on the psyche has been reduced for Syrians who struggle for survival and to maintain dignity and integrity, as much as possible, as time goes by and the increasing horror of successive calamities makes its presence felt.

The system is merciless, the ruling authority, starting from the narrow circle who holds decision-making power, reflects this cruelty and intimidation in all its dimensions in the government and those in control, down to the most junior, fear-stricken employee. There is no place for mercy in their hearts, even if the disaster reaches the point of death at the door of a government hospital, under the pretext that the “system” did not agree to admit the patient. This is what happened with a coronavirus patient who suffocated and died at the door of the polyclinics in the al-Mushrifa area in the Homs countryside.

George Bitar, 60, did not die in a habitual manner. Rather, he was intentionally killed, as it were, when the staff of the polyclinics prevented him from entering and receiving treatment, leaving him in a pickup truck as if he were not human. The ambulance was not allowed to take him to a nearby hospital in the area.

Despite the spread of the clip documenting the incident in detail, and despite the fact that it was broadcast by the local Al-Khabar TV, no official authority commented on the incident, although such happenings may result in shutting down entire organizations in foreign countries. The “system”, which did not allow the patient to be admitted to the hospital, did not apologize or provide an explanation.

Aren’t you afraid for your children?

The al-Mushrifa incident greatly affected the residents of Syria and brought back many questions about the perception of the authorities and government officials of the people. For how long will the state of double standards continue and the provision of services to specific members of the authority and their children, while preventing the rest from accessing them?

A wave of anger spread on social media and reflected the extent of sadness, fear, and ire the Syrians felt. One of them commented, “You are not scared that what you did to that old man would happen to your children?”

There were numerous demands for an investigation and for the officials at the al-Mushrifa Center to be suspended from work. A number of online users called for the dismissal of the minister of health and the governor.

Some questioned previous decisions issued by the Syrian government, related to ramping up the medical readiness of hospitals and making sure medical cadres are attending to coronavirus cases, as well as stopping the deprioritization of cases (called “cold cases”), deemed less important and dangerous.

The health system of the ruling Baath regime has so far recognized little more than 8,000 cases of coronavirus, while media reports have spoken of hundreds of thousands of infections and the spread of the virus in various areas of Damascus and the inability to control it.