With just days to go until the US presidential election, Syrian are wondering what each candidate will mean for them and the future of their country reports Al-Araby Al-Jadeed. 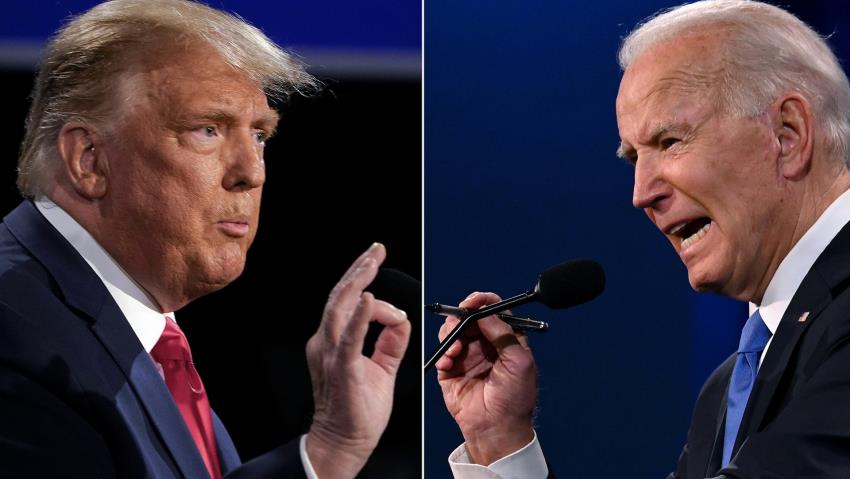 Trump has angered Arab American voters with his anti-Islam rhetoric and “Muslim ban”, which prevents people from five Muslim majority countries from visiting the United States even if they have close relatives living there.

Biden has vowed to repeal this ban and has said he would “honour contributions from Muslim-Americans”.

The current US president’s unwavering support for Israel, which has gone far beyond that of any of his predecessors, has further alienated Arab Americans.

However, for Syrian Americans in particular, the choice between Biden and Trump is a difficult one. In his 2016 election campaign, Trump used populist and racially charged rhetoric against Syrian refugees and followed this up by drastically decreasing the number of refugees from all countries accepted into the United States.

In the 2016 fiscal year, before Trump was elected, 12,587 Syrian refugees were admitted to the US, while in the 2018 fiscal year, the number was just 62.  Syrian Americans and Syrian residents of the United States have been affected by Trump’s Muslim ban, with families unable to unite and couples being torn apart.

But some of Trump’s other Middle East policies have won him significant support among Syrian-Americans and Syrians in the wider world. Trump’s policy towards Iran represented a complete break with that of his predecessor Barack Obama. Obama’s commitment to engagement with Iran on a multilateral basis and his lifting of sanctions on the country as part of the 2015 nuclear deal was blamed by many Syrians for an emboldened Iranian presence in Syria.

Iran, along with Russia, has been one of Bashar al-Assad’s key backers in the Syrian conflict, which has killed more than 500,000 people and displaced nearly 12 million others. The Assad regime and its allies are responsible for most of the conflict’s casualties.

The Obama administration, while initially offering rhetorical support to the popular uprising which broke out against Assad in 2011, refused to provide any significant support to the Syrian rebels, ignored calls for a no-fly zone to protect civilians from the regime’s deadly aerial bombardments of towns and cities, and – most famously – failed to impose its own “red line” when the regime killed 1,400 people with chemical weapons in the rebel-held Ghouta area of Damascus on August 21, 2013.

Obama would go on to disparage Syrian rebels in 2014 as “farmers, dentists and folks who have never fought before”.

Towards the end of his administration’s time in office, the Assad regime managed – with crucial Russian support – to reverse many of the gains made by Syrian rebels in the early days of the Syrian conflict, displacing tens of thousands of people as a result. Most notably, it took full control of east Aleppo – the last major urban area of Syria to be held by Syrian rebels.

After Trump came to power in 2017, there was little overt change in the administration’s Syria policy. With crucial assistance from Russia, the regime was able by 2018 to gain control of all the remaining areas of Syria held by anti-Assad rebels except for Idlib province and a few areas along the Turkish-Syrian border.

However, there were key actions and policies which the Trump administration took in Syria and the wider Middle East which have had the effect of weakening the Assad regime and not allowing it to enjoy the spoils of its 2018 victories against the rebels.

In contrast to Obama, when Assad used sarin gas in a chemical attack on the town of Khan Sheikhoun in 2017, Trump responded with airstrikes against Assad’s Shayrat airbase, although this response was largely symbolic and did not deter the regime from carrying out conventional airstrikes and using chlorine gas against civilians.

Under the Caesar Civilian Protection Act, the Trump administration has also slapped sanctions on regime figures and entities. However, it was Trump’s pullout from the Iran nuclear deal (formally known as the Joint Comprehensive Plan of Action – JCPOA) and his reimposition of sanctions on that country which seem to have had the greatest effect on the Assad regime.

A June 2020 article in Foreign Policy noted that Obama’s lifting of sanctions of Iran had been welcomed by the Assad regime because it unfroze Iranian assets abroad and allowed it to provide the regime with assistance.

By reimposing economic sanctions, the Trump administration, the article noted, “brought the Iranian economy to its knees, forcing it to focus its now-limited resources inward and leaving Syria to face its economic problems alone.”

A later Foreign Policy article noted that Trump’s Syria policy had succeeded in turning Assad’s “triumph” into a “disaster”, ensuring that Syria remained restive by stopping the funds the Assad regime needed for reconstruction, after huge swathes of the country’s infrastructure had been destroyed in nine years of conflict, mostly by the Assad regime itself and its allies.

Trump’s sanctions against Assad’s regime and his Iranian backer have not translated into gains for the Syrian opposition or alleviated the plight of the Syrian people in any way, however. On the contrary, poor Syrians living in regime-controlled areas have seen their situation become even worse as sanctions take their toll and prices rise.

However, Syrians have also noted that the Trump administration backed Turkey when it put a stop to a bloody regime offensive on Idlib in early 2020, which could have seen upwards of two million people displaced if it had been successful.

These factors have led Syrian-Americans to take a complex view of Trump, with many of those who castigate him for his anti-Muslim bigotry, anti-refugee policies, and offensive statements expressing guarded approval of his Syria policies.

Amr al-Azm, a Syrian professor of history and anthropology at Shawnee State University in Ohio told The New Arab, “Syrians in the US are generally split between their dislike for Trump in general, for all the obvious reasons, and in particular because of his so called ‘Muslim ban’ which included them and the family members they are hoping to bring over”.

“They do however look favourably on his stance with regards to Iran, the JCPOA, Hezbollah etc. For some Syrians, it’s a single issue voting matter,” he added. “They also like that he has by and large gone easy on Erdogan but they’re not so happy that he’s done the same with Putin though. They see their support through the lens of the Syrian conflict.”

It is not clear what a Biden presidency will mean for Syria. The Democratic Party candidate has said little about Syria during the election campaign but he has indicated that he wants to restart the diplomatic process with Iran and has made a vague statement about US support for reconstruction efforts in Syria. While a Biden presidency may stabilise the situation between Iran and the United States, Syrian opposition groups have expressed fears that this would embolden Iran in Syria and strengthen the Assad regime.

Al-Azm added that the fact that Biden was Obama’s vice-president made him suspect in the eyes of many Syrians.

“The problem with Biden for most Syrians is his association with Obama. Obama is almost universally hated by Syrians over his handling of the Syrian conflict. He is seen as having abandoned the Syrian opposition to its fate and not supported it at critical junctures effectively allowing Assad to win.

So for many Syrians they fear that Biden will follow a similar policy coupled with a return to the appeasement of Iran, loosening sanctions, and trying to get the JCPOA back on track.”

Biden’s promises to repeal Trump’s “Muslim ban” and his outspoken attacks on Trump’s record of bigotry has won him support among Syrian-Americans however.

Writing for The New Arab recently, Leena Zahra, an activist who has been associated with the ‘Syrian-Americans for Biden’ campaign said, “I’m voting to amplify the voices of those who have fled horror. I’m voting to combat the discriminatory Muslim Ban, to advocate for a revitalized refugee resettlement program.”

However, Biden’s clarity on the Muslim ban issue is matched by near-total opacity on Syria.

Malak Chabkoun, an independent Syrian-American writer and researcher, told The New Arab, “I don’t think either candidate will make much of a difference for Syria – other than the ‘war on terror’ rhetoric, it’s not a useful issue for either campaign, particularly with a very unstable domestic situation in the US.”

She noted that despite Trump’s anti-Iranian policies, Iran and Russia still had a strong presence in Syria, and there was little sign of any change.

“For Trump, Syria is useful when he can use it as a talking point. However, his administration has failed to change the status quo in Syria. Even Trump’s ‘tough on Iran’ stance hasn’t made much of a difference in removing Assad or occupiers like Russia and Iran. In fact, even with the Caesar Act passed under the Trump administration, the situation is arguably worse in Syria than it was under the Obama-Biden administration.”

Chabkoun said that Trump’s “hateful” rhetoric against American citizens from minority groups made it impossible for her to support him and that anyone trying to make a decision on which candidate to vote for based on their Syria position “will be sorely disappointed.”

While Syria has largely dropped out of the headlines in the United States and does not appear to be a top priority for either candidate, the global influence of the United States and the way it chooses to conduct its relationship with Iran could still have an effect on the course of events in Syria, whether this is intended or not. Neither Biden nor Trump has shown much concern over the fate of Syria’s people, the latter describing the country, in his typical obtuse style, as “death and sand”.

However, following ten years of one of the most brutal and one-sided conflicts in the world, the fate of Syria is no longer in the hands of its people and could depend on the policies two apparently indifferent American presidential candidates choose to pursue in the wider Middle East.