Ever since leaving Syria, Majd Abazid has strived to achieve his goals and how now created a revolutionary technique for detecting the early signs of Alzheimer’s in patients writes Zaman Al-Wasl. 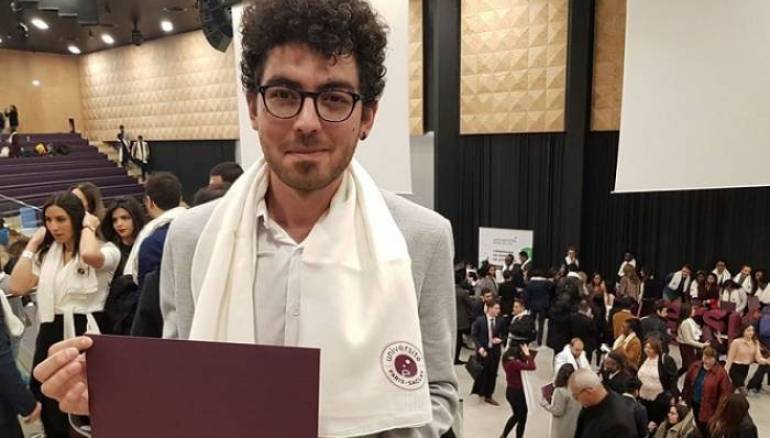 Majd Abazid, a Syrian student, has devised an approach of computational and mathematical methods in medicine based on machine learning and artificial intelligence that serves the in early detection of Alzheimer’s and other diseases, but that can be used in other fields.

Abazid patented his invention, at the European Patent Office in Germany, which is based on detecting and extracting the most significant variables that distinguish between a healthy person and a person suffering from neurological diseases, by applying specific mathematical formulas to electrical brain signals (EEG), which proved to be very effective in the early detection of Alzheimer’s disease, according to its inventor.

Abazid, originally from Daraa, enrolled in one of the city’s schools a year and a half earlier than his peers. Since his childhood, he was passionate about mathematics, which was encouraged by his parents.

After high school, his father wanted to send him to Europe to pursue his scientific studies, so he took German. But because of his age, he chose to stay and enroll in the Faculty of Computer Engineering and Automation in Damascus University, but could not finish his forth year there because he was wanted by the regime’s intelligence services in 2012. He then moved to Egypt, where he lived for a year and won a scholarship to France, which was, according to him, a stepping stone in his academic and scientific career.

Upon his arrival in France in 2014, Majd had a specific dream: to complete his education, obtain a doctorate and join a scientific research institution. A dream he was able to gradually realize, studying French, then receiving a bachelor’s and a master’s degrees in computer engineering, later working as a scientific research engineer, writing for the first time scientific articles that were published in specialized journals. He is currently completing his Ph.D., entitled “Early Detection of Neurological Diseases by Electrical Brain Signals Using Artificial Intelligence and Mathematics,” which was the basis of his invention and which he plans to obtain next year.

Abazid explained that in previous studies, researchers used to randomly select a small percentage of the information contained within an electrical signal (50, 30, or 70 percent), and then to apply mathematical laws to create a brain map. While the results were acceptable, he decided to integrate all these percentages from 10 to 100 percent of the amount of information, then apply the Gram Shmidt mathematical method to extract the most significant variables that characterize Alzheimer’s patients, and then create a model for each patient. Based on these variables, the rate of detection of Alzheimer’s patients reached 100 percent in the hospital’s database, where he is working on his Ph.D.

The high percentage does not mean that the rate of detection of Alzheimer’s peaks in all cases, since, according to Abazid, it is related to that specific database. However, relatively, the method is applicable and still viable, while other similar studies were not able to achieve the 80-85 percent rate with the same database.

Abaizid has received a patent from the European Patent Office and he is now awaiting the American office to confirm for it to become a global patent. He expressed his hope for scientific research laboratories to invest in his inventions and to apply it to a larger number of patients.