With three different currencies in circulation and few controls, residents in northwestern Syria are struggle to keep up with the changing prices and values writes Enab Baladi. 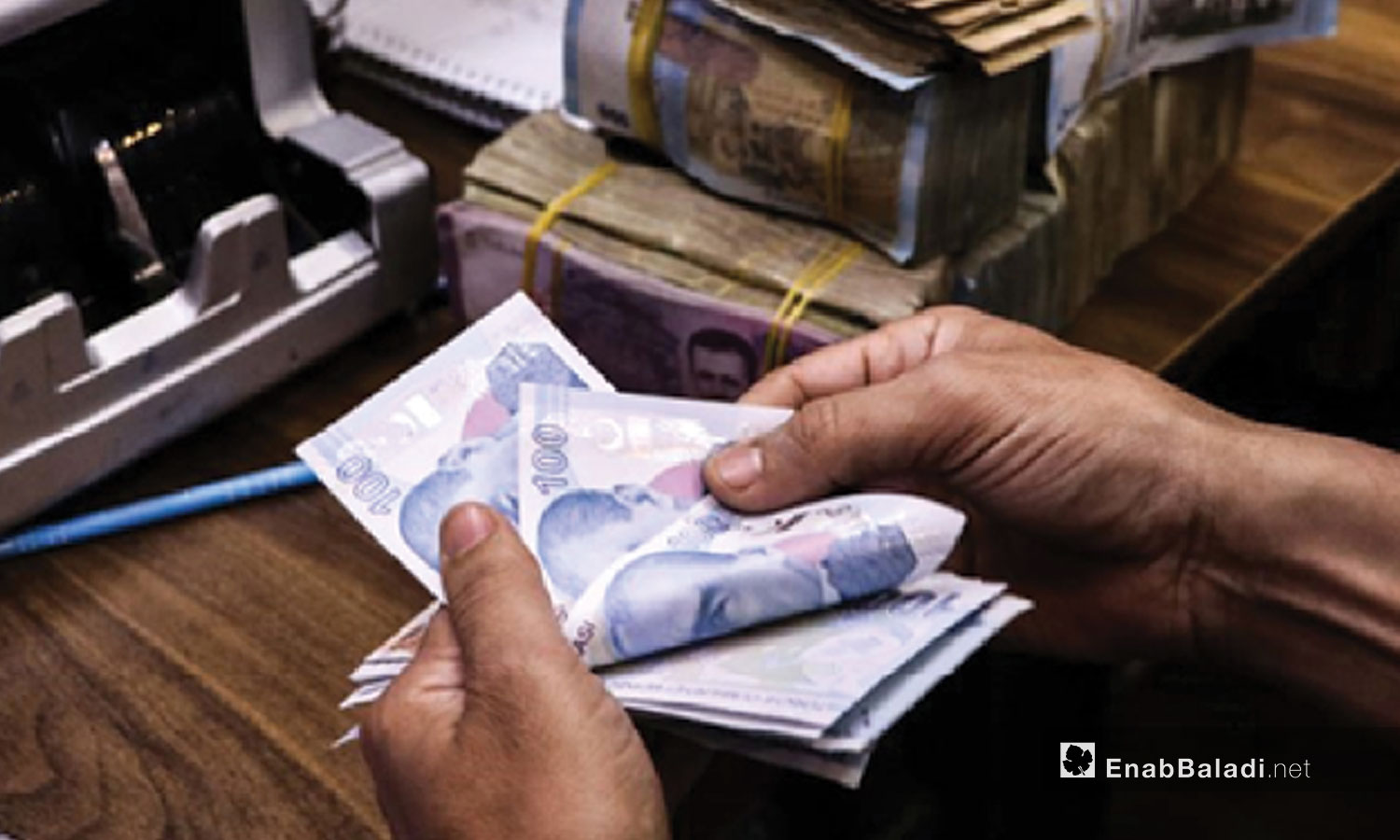 Omar Salloum, from the town of Haysh in the northern countryside of Idleb, believes that conducting transactions using the Syrian pound is better than using other currencies, after the region adopted the Turkish lira and the American dollar in the region. This was due to the exploitation by traders and exchange shops of what Salloum described as helpless individuals.

Confusion hits residents of northwestern Syria when trying to make a decision to buy or exchange currency, as some merchants and exchange shops have been taking advantage of the fact they have been dealing with three different currencies, amid the absence of supervision by the local authorities.

What has been going on?

The owner of an exchange shop in Idleb, who spoke on condition of anonymity, answered Enab Baladi’s questions, commenting on the behavior of his fellow exchange shop owners and merchants.

According to the source, the citizen is losing in two ways: the first is when the Syrian pound is exchanged into the Turkish lira. At that time the exchange shop owner determines the exchange rate without looking at official numbers or being supervised. The second way is while purchasing goods from merchants, who set the prices based on fluctuations in the exchange rate of the US dollar or Turkish lira, and again make sure their margin of profit is large.

However, these exchange rates are not regulated or consistent in the market, and with the absence of official pricing, the differences are based on the merchants’ whim.

The same exchange shop owner appealed to the authorities that manage the region, most notably the Salvation Government, to completely stop circulating the Turkish lira in the market, or alternatively to adopt a clear process for pricing the goods in a way that limits volatility and the whims of merchants and exchange shop owners, who are now controlling the market.

How to get rid of this dilemma?

Researcher and lecturer in finance and banking, Manhal al-Othman, told Enab Baladi that the motive behind dealing with the Turkish lira or the US dollar was the fluctuations in commodity prices due to the fluctuation of the exchange rate of the Syrian pound, whose value hit an all-time low.

However, when the local authorities introduced dealing with the Turkish lira, they did not enforce a binding regulatory mechanism on merchants and exchange shops, nor put banking rules in place to regulate the circulation of the currency.

Some merchants and residents still use the Syrian pound to measure the value of goods and commodities, which is all the more confusing amid the reigning situation, according to Othman.

According to Othman, the local authorities are heading to increased dependence on the Turkish lira and to impose binding decisions and executive mechanisms to compel citizens to use it as an alternative to the Syrian pound, along with the US dollar, with the lira to be used for smaller deals, and the US dollar for big deals.

According to Othman, among the most important measures that must be taken by the Salvation Government operating in Idleb and the Interim Government operating in the Aleppo countryside are the formation of a “cash council” whose tasks would be to regulate prices and the amount of money being circulated, in addition to paving the way for imposing the use of the Turkish lira. In other words, giving the process one to two months before making the full switch, in coordination with the security authorities in the region.

The so-called Salvation Government had identified several steps to halt the economic decline in the region, on Jun. 10, 2020, during a meeting of the Shura Council (the Consultative Council), including “working to adopt the Turkish currency instead of the Syrian pound as soon as possible.”

As for the Syrian Interim Government, its president, Abdul Rahman Mustafa, announced that the government would hold meetings with Turkish officials in order to rectify the deterioration of the Syrian pound and pump the Turkish currency into the northern countryside of Aleppo.

Mustafa tweeted out on Jun. 10, 2020, that the government had taken the first steps to pump the Turkish lira into the opposition-controlled north and that this measure will be followed by more steps.

On Jun. 12, 2020, quantities of Turkish currency began to arrive in Idleb, northern Syria, coinciding with the confirmation by the Salvation Government that the salaries of employees will be disbursed in Turkish liras.

Much ink has been spilled regarding the Turkish lira in the Syrian north in recent months, in an attempt to determine its pros and cons.

However, after the Syrian pound took a record dive — the exchange rate of the US dollar against the pound was 3,000 on Jun. 8, 2020, the governments of northern Syria (the Salvation Government in Idleb and the Interim Government in rural Aleppo) began searching for alternatives to the Syrian pound.