The recent Caesar Act has posed a number of issues for the United Arab Emirates, who until recently were engaging in normalisation with the regime writes Al-Araby Al-Jadeed. 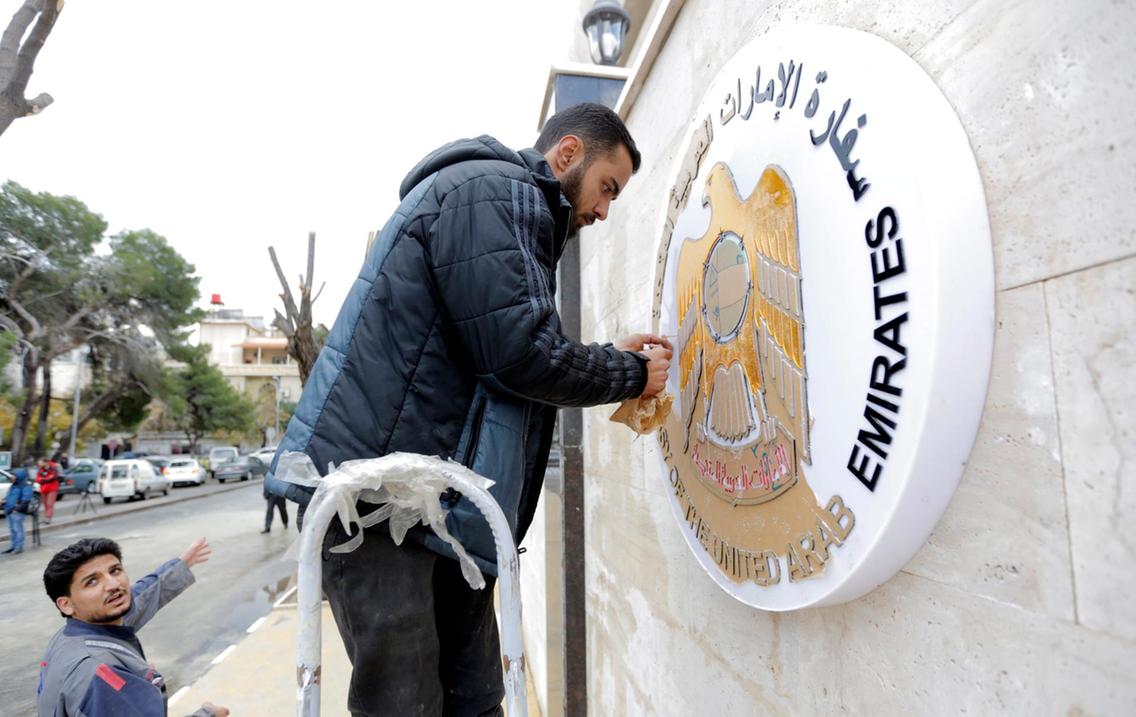 It came after the US-sponsored Caesar Act was officially implemented, imposing sanctions on 39 companies and individuals affiliated with the Syrian regime in a bid to pressure Assad into peace talks after nine years of war.

The Caesar Act primarily aimed to target the regime’s allies like Russia, China, Iran and Hezbollah. But Washington’s close regional ally, the UAE, seeks to defy the US and continue ensuring the survival of Assad’s regime, an essential actor for its geopolitical goals.

“I assured [Assad] of the support of the UAE and its willingness to help the Syrian people. Humanitarian solidarity during trying times supersedes all matters, and Syria and her people will not stand alone,” MBZ wrote on Twitter.

This took place amid the UAE’s efforts to counter Turkey’s influence regionally, and the phone call therefore bolstered its ties with Damascus using the coronavirus crisis as a pretext.

The UAE has long presented its efforts in Syria as humanitarian, such as aiding refugees within the country. However, this pro-humanitarian guise acts as a smokescreen for its ulterior motives and backing for the Assad regime. There is, in fact, ongoing cooperation between the UAE and the Syrian regime within the intelligence sector.

Emirati officials are training Syrian intelligence officers inside the Emirates, according to a report in in Orient XXI. This process began on 15 January, with programs to last between two and twelve months. Thirty-one non-commissioned officers as well as eight civilian computer engineers are being trained in information and communication systems, computer security and networks.

These programs have continued despite Washington’s pressure on the Syrian regime and countries that support it.

Meanwhile, Emirati companies have supported Assad’s war efforts in breach of US sanctions. Dubai Computerlinks FZCO supplied prohibited US equipment to the Syrian regime to monitor and control internet traffic and was ordered to pay a small fine.

Some Emirati companies have also often supplied fuel to the Syrian military, and Dubai-based Yona Star acted as a shipping agent for the Syrian Air Force, Syrian Air Force Intelligence, the Army Supply Bureau and the Scientific Studies and Research Centre (SSRC), which develops the regime’s biological and chemical weapon capabilities.

In January 2019, the UAE hosted a Syrian business delegation, while in August that year, a delegation of over 40 UAE businessmen attended a state-backed trade fair in Damascus, despite US warnings.

Before 2011, the UAE was Syria’s second-largest Arab investor, mostly in real estate and tourism, so it would ideally seek to revive its investments there.

Clearly the UAE has ensured that, despite past sanctions, it has built stronger ties with the Assad regime. Indeed, the regime has become increasingly important for the UAE’s ideological and regional aims.

Since the Arab Spring, the UAE has pursued a crackdown on revolutionary forces across the region, fearing their success could inspire calls for reforms within the UAE itself. It has therefore tried to maintain the traditional status quo, supporting reactionary forces in various countries, and saw Assad’s authoritarian regime as a bulwark against change in Syria.

What is the Caesar Act and how will new US sanctions impact Syria?

Earlier in Syria’s war, the UAE diverged from Saudi Arabia and Washington’s position, despite vocally opposing the Syrian regime at first, in line with the Arab League’s stance. In 2014, it supported tens of thousands of alternative opposition fighters to counteract Islamist anti-regime forces. Then after Russia intervened in September 2015, which helped the regime regain control over most of the country, it openly accepted Assad and Russia’s presence.

The UAE supported normalising Assad in 2016, but Donald Trump snubbed this idea after assuming office. Abu Dhabi still retained its ties with Assad, and reopened its Damascus embassy in December 2018, marking a considerable shift after Syria’s expulsion from the Arab League in 2011. Saudi Arabia and Bahrain have now also ended their opposition to Assad, showing the impact of the UAE’s normalisation efforts.

More recently, amid its growing regional rivalry with Turkey, Assad is seen as an increasingly important ally for Abu Dhabi’s efforts to counteract Ankara.

The UAE had previously backed the Kurdish People’s Protection Units (YPG) in northern Syria, which Turkey has fought militarily, therefore seeking to check Ankara’s influence. Yet after Turkey’s military intervention to support the Syrian opposition in Idlib in February, Abu Dhabi focused more on bolstering Assad, to counter Turkey’s efforts there.

The UAE is also engaging with Iran, which has proactively supported the Assad regime with militias since 2013, now showing a common alignment of their interests in Syria. The fact it now engages with Tehran shows how the UAE is further diverging from US policies, given Washington’s sanctions and ‘maximum pressure’ campaign on Iran.

Though US pressure would deter some UAE actions, such as extensively supporting Syria’s post-war reconstruction, Abu Dhabi can continue to secure Assad’s survival and control in Syria with its current limited efforts.

These measures will be tolerated, due to Washington’s negligence. After all, Abu Dhabi has undermined the United States’ stated foreign policy aims in other instances. For example in Yemen, it has cooperated with Al Qaeda and other extremists groups or individuals which the US has labelled as terrorists, such as Salafist warlord Abu al Abbas, despite Washington’s own counterterrorism campaign against Al Qaeda in Yemen.

Despite its breaches of US sanctions on Syria, the UAE is still an important regional and economic partner for Washington.

The US has shown it will not take a harsh stance on Emirati involvement in the country, should its support for Assad remain around current levels, even though these actions still undermine the US position on Assad and efforts to facilitate a peaceful political settlement.