A recent report in a Saudi newspaper has divided the opposition and those involved with the regime defector “Caeser” writes Al-Modon. 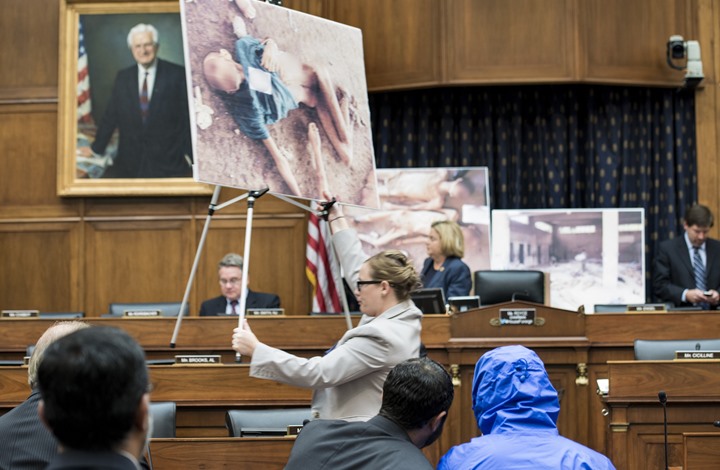 Controversy erupted within the Syrian opposition after the Saudi newspaper Okaz published an interview with the team of famous Syrian regime defector “Caesar,” which included sharp criticism toward the Syrian National Coalition (SNC) and accusations that some opposition figures were seeking private gains from the work of the former security cameraman from Damascus. Caesar is known for having leaked more than 50,000 photos after fleeing Syria, including pictures of the dead bodies of detainees and deadly torture in the regime’s security branches.

The controversy would not have garnered interest had it not been for some well-known opposition figures making direct accusations of prominent SNC personalities for “blackmailing, threatening and trying to kidnap Caesar.”

The SNC was quick to respond to what was said in the interview, especially criticisms and accusations levelled at them by “Sami,” a colleague of Caesar and his main assistant in preparing the file in Syria as well as smuggling it out of the country. A statement released by the SNC downplayed the importance of the accusations, saying that it is the body’s duty to invest in any law that serves the Syrian people, and to act according to this duty. Any person who documents crimes is doing his duty, without becoming an exclusive agent for the victims.

Opposition figure Imad al-Din Rashid responded on his Facebook page with a statement “clarifying what the Okaz newspaper published.” In it, he indirectly denied the accusations against him, questioning the interview itself. He added that he was among the first people to work on communicating Caesar’s findings to international courts and decision making circles in the United States and Europe.

He warned that the aim of spurring this controversy is to impact the credibility of Caesar’s account as new American sanctions are set to close in on the Syrian regime. “By virtue of my knowledge of Caesar’s security conditions, I highly doubt that he would have neglected his security and carried out an interview with the media,” Rashid wrote.

The Saudi newspaper commented that Rashid incriminated himself when he responded to the accusations levelled against him in the interview, despite his name having not been explicitly mentioned. The newspaper added: “He was the first person, nine days after the dialogue occurred, to deny what Caesar and Sami said, and this did not happen.”

Rashid, who resides in Turkey, was responding to direct accusations levelled against him by other opposition figures led by Kamal al-Labwani, who published names of those whom Caesar and Sami had seemingly been accusing. He published a number of posts on social media that four members of the SNC, in addition to Rashid, were the ones supposedly mentioned without name by Caesar’s team. This caused a massive uproar, further intensified when Labwani said that Caesar’s team had confirmed these accusations in his testimony before the US Congress.

But one opposition figure who spoke during the same Congressional committee confirmed to Al-Modon that Caesar had not referred in any way to this issue during his testimony.

Labwani told Al-Modon that, “Caesar’s testimony against certain parties and names in the opposition was recorded in a secret report given to Congress.”

Though Labwani did not mention how he was able to obtain this secret report, he remained confident in the information he had previously reported. He renewed confirmation of the accusations levelled against Rashid, namely that he had “tried to benefit financially from this file.” He also appeared to confirm accusations of an SNC leader close to Rashid, who had allegedly tried to lure Caesar and Sami with money to go to Moscow, before beginning to threaten and blackmail three other members.

Labwani did not deny attempts to employ this case in the political struggle between Saudi Arabia and Turkey to dominate the Syrian opposition, pointing out that, “Saudi Arabia wants to use this file against the opposition in Turkey within the framework of the struggle over the Constitutional Committee and the High Negotiations Committee.” He added that the usage, “was poor, and the truth should have been shared another way and in another forum, as this [method] has tarnished the issue and weakened accusations that I see as strong.”