With millions of people displaced and the country's healthcare system in tatters following nine years of war, the threat of a devastating outbreak of coronavirus in Syria is real writes Al-Araby Al-Jadeed. 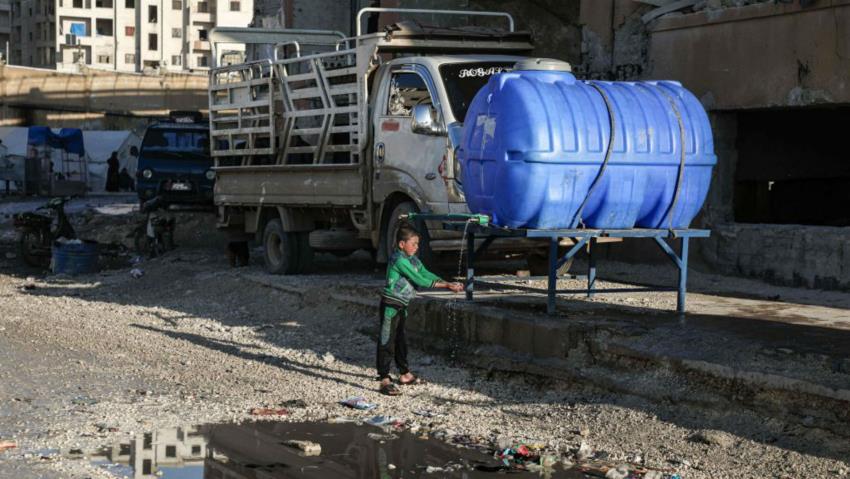 The spread of COVID-19 has dominated the media in recent weeks, and the World Health Organization has now declared the novel coronavirus a pandemic. Meanwhile, a battle between the Assad regime and rebel forces in Idlib, Syria has displaced nearly one million people since 1 December, 2019.

Most of the displaced are women and children and many are being uprooted for the second or third time. For the displaced, and for many others living in structures ravaged by war, lack of access to basic medical resources and safe housing are common challenges. COVID-19’s arrival to the Middle East presents a new challenge to war-torn Syria, one which both the country and the international community are ill-equipped to address.

Although rumours of COVID-19 among Assad’s forces have sparked panic among some Syrians, a widespread response has not occurred. This lack of preventative measures, combined with the country’s current political and humanitarian realities, raises crucial questions about Syria’s ability to respond to a pandemic.

While the WHO states the rumours about COVID-19 among Assad’s forces are unfounded, two Syrians were tested for the virus earlier this week. Although these tests came back negative, it is very possible that COVID-19 has already arrived in Syria.

Regular movement across Syria’s border with Lebanon, a country that has multiple confirmed cases of the virus, increases this likelihood. Limited data collection mechanisms, minimal access to many parts of the country for medical personnel, and insufficient healthcare facilities all pose challenges to the identification of COVID-19.

Additionally, people may mistake COVID-19 for the seasonal flu, according to Alaa Baa, a Food Security and Livelihoods Program Manager at a Turkey-based NGO that provides cross-border assistance to northwest Syria. “It is currently winter and people [who] get the flu might not know the difference” says Baa.

The ongoing war and the trauma of loss might make the virus seem insignificant by comparison for many Syrians. “People are underestimating the threat because they are facing continuous war,” Baa says. “They feel dying from a virus would be better than dying from a bomb and don’t see the seriousness of the issue.”

A late response to a COVID-19 outbreak will allow the virus to proliferate, resulting in significant spread before the first case is identified.

Proliferation will also be exacerbated by the absence of medical infrastructure for the treatment of identified COVID-19 cases. Due to government restrictions and disturbing levels of violence, many people in need lack humanitarian support. In February, two Oxfam aid workers were killed while delivering supplies in Daraa Governorate in southern Syria. Such instances of violence against humanitarian workers will likely discourage medical responses in unstable areas.

Even if prevention measures are undertaken in more stable areas of the country, the frequent movement of populations from besieged areas and lack of infrastructure to restrict this movement will undermine prevention efforts.

Additionally, the country lacks appropriate quarantine facilities. While concentrated populations living in structures with inadequate sanitation facilities are not unique to war-torn countries, the scale of the destruction to Syrian housing poses specific challenges. Many live in partially destroyed dwellings or share small, crowded spaces after losing their homes. Even worse, are the conditions in displaced persons camps, such as those in northeast Syria, where a single tent is shared by five people on average, and where there are no private sanitation facilities.

The WHO has indicated an urgent need for COVID-19 support to vulnerable countries, and is working with the United Nations on a COVID-19 emergency response plan for northwestern Syria. However, it is questionable whether a plan that only addresses part of the country can effectively respond to a COVID-19 outbreak. Absent appropriate quarantine and healthcare facilities and with many continuing to flee violence, controlling the spread of the virus seems unlikely.

Given these challenges – both humanitarian and political – COVID-19’s spread within Syria could reach an unprecedented scale. In order to mitigate this, a collective global response is needed.

First, it is crucial that all countries who have been financially or politically involved in Syria’s war call upon all combatants to respect the principle of medical neutrality outlined in the Geneva Conventions. This is imperative to ensuring that Syrians can safely access existing medical facilities to seek treatment.

Additionally, an effective internal response will necessitate collaboration between the Damascus government, the WHO, and humanitarian actors, among others. Although a COVID-19 response plan is being formulated for Idlib by the WHO and the United Nations, high levels of ongoing violence in the region will make containment of COVID-19 to the designated response area impossible.

Nearly one million people have been displaced in the region since December 2019 and this number continues to grow. While regional lockdowns are becoming increasingly common in global COVID-19 responses, such a lockdown in northwestern Syria would result in severe human rights violations. Given the barriers to restricting movement in the region, it is crucial that the WHO and the United Nations collaborate with the Damascus government to ensure that COVID-19 response efforts and access for medical personnel extend throughout the country.

Furthermore, the international community has a vested interest in responding preemptively to a COVID-19 outbreak in Syria due to the ease with which an outbreak in Syria is likely to spread beyond the country’s borders. Neighbouring countries may close borders in an effort to reduce its spread.

However, cross-border human smuggling networks in Syria are well-developed after nearly nine years of war and prevent neighbouring countries from eliminating migration from Syria. To mitigate COVID-19’s potential for rapid spread within Syria and beyond, the international community must work together to provide financial, administrative and advocacy support to ensure Syria has the best systems possible to address a COVID-19 outbreak.

Without a serious, collective global response, the situation in Syria could even rival the scale of the outbreak in Wuhan, China, where the virus was first identified.

Melissa Diamond is a Schwarzman Scholar at Tsinghua University in Beijing, China. Prior to the fellowship, she supported forcibly displaced populations in the Middle East. She is a Rotary Peace Fellow and holds a Masters in Conflict, Security and Development.