Idleb has witnessed numerous ceasefires, but none of them have been able to stop the bloodshed writes Al-Araby Al-Jadeed. 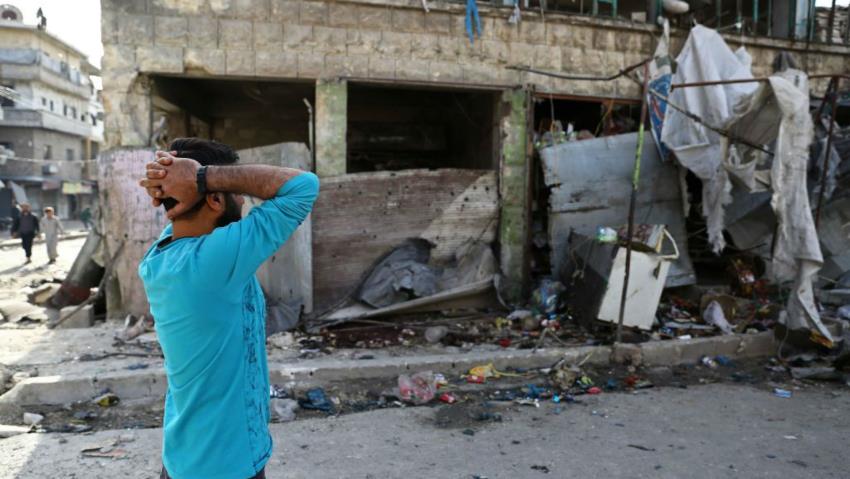 Though the deadly violence levelled against Idlib governate and its surrounds in northern Syria has been consistent, it has been treated and understood inconsistently.

Since the fall of rebel areas in southern Syria in 2018, Idlib and the Aleppo countryside have faced siege and assault as the Assad regime and its backers marshalled their forces for a new advance.

Villages and towns which have held out for almost a decade of Syria’s civil war have seen new attacks from the air. Before that, bombings in Kafr Nabl and Maarat al-Naman had scarcely ceased. Hundreds were killed, a dozen or so per week.

Often, single attacks on marketplaces and public squares would kill enough to be considered a massacre on their own. But after 2018, the frequency of these attacks redoubled.

Kafr Nabl – a bastion of protest and peaceful resistance – has been bombed relentlessly. These attacks succeeded in reducing the town to a state of near depopulation.

Maarat al-Naman, for so long a target of aerial bombardment and probing attacks from the regime, is now cut off by a new regime offensive.

Saraqeb, a town from which thousands are presently fleeing, was the site of a regime chemical attack in 2013, and another – this even better documented – in 2018.

No observer can be surprised by the fact that so many do not wish to be around when the people who can do these things to them without second thought arrive in force.

The United Nations estimates that 350,000 people have fled since the beginning of the most recent regime push into Idlib and Aleppo provinces, totalling more than 730,000 when taken with those who travelled north away from the fighting in the months before.

Idlib was already a province of refugees – many deported from other parts of Syria as the result of surrender deals, or from towns and villages which were sieged and starved into submission. Now these people are in flight for a second time.

Amid the ongoing offensive, life has become expensive and, for the aggressors, expendable. Amid a general collapse in the Syrian economy, necessities have risen to unaffordable prices. Petrol has to be imported. Food is dear.

The missing few words omitted above are as important as those details. All this has occurred “since the renewal of hostilities in the de-escalation zone in [Idlib] and surrounding areas”.

That use of “de-escalation zone” could not be more bitter.

But another term deserving of as much scorn is “ceasefire”. It suffers less from the mangling of language which diplomats sometimes achieve. But in Syria its intent has been hollowed out and its meaning defeated just as efficiently.

So much of the fighting in Idlib has been done under the auspices of ceasefire. The regime has moved and built up its forces. Its bombers have hardly ceased their sorties. The regime’s Russian ally, in spite of its recent preoccupations, including deal-making with Turkey, has not halted its forces patrolling, let alone its aircraft bombing.

So many have died in those times where fire was nominally being held.

The story of ceasefires not worth the name is the story of Syria’s war. And as a last redoubt of opposition to the regime faces collapse and many thousands face massacre, it is being renewed and eagerly enacted once again.

Here the inconsistent international reaction to consistent violence is at its clearest.

The UN takes ceasefires as an opportunity for useful hypocrisy. But inconsistency goes beyond the international assemblies.

Worldwide, in newspapers and among those unwilling to face it, lulls in fighting are acknowledged and held to mean that the latest ceasefire is likely taking effect. Around the world, the constant bombing of Idlib and rural Aleppo is forgotten. The results of individual attacks are sometimes reported as “violations” of ceasefires. But that is accurate to the letter and not the true spirit of things.

This form of warfare is less a violation than a tactic – an integral part of the regime’s way of making war. As for ceasefires, all of these agreements are made in the full knowledge they will soon enough be cast aside.

Whether this is accepted among those who discuss ceasefires as though they matter is uncertain. It is certainly not acknowledged. Amid general pessimism and a “complexity” which is broadly lamented, what benefit is there to be direct about this?

Given the sense among many in acronymic organisations that the war is over but for the business of fighting, all this violence and death feels to them like a formality.

Certain battlefields will inevitably fall to the regime, this manner of thinking goes. A deserted Maarat al-Naman is falling to the regime as I write, but many wrote off Kafr Nabl, before its depopulation, too.

It seems as though international commentary is caught between noting these significant moments and uniting behind an acknowledgement of the regime’s momentum, and openly declaring a winner and underwriting a “victory” won through slaughter.

Both complacent silence and favouring regime victory forget the daily suffering of those under fire, or those who flee the fighting unsure of whether they will be allowed to escape its toll.

Assuming the conflict is over, but for its final actions, allows international observers and policymakers to feel justified in getting on with business as usual. They wonder about Turkey’s treatment of refugees, and examine with the care their jobs demand other countries’ borders and the movement of people.

But the war is not over, nor is it ever halted. And as the bombs fall and the regime’s offensive continues its slow advance, many under fire and under bombardment will justifiably feel forgotten as well as abandoned.

Abandoned by those who talk of ceasefires without sounding or feeling a bitter note, who talk about “de-escalation” in any context without understanding its absurdity in Syria, and who have given up even observing the war being fought before their eyes.