No sooner had a new ceasefire been announced, regime and Russian began to conducts bombardments of towns and cities in Idleb writes Alsouria Net. 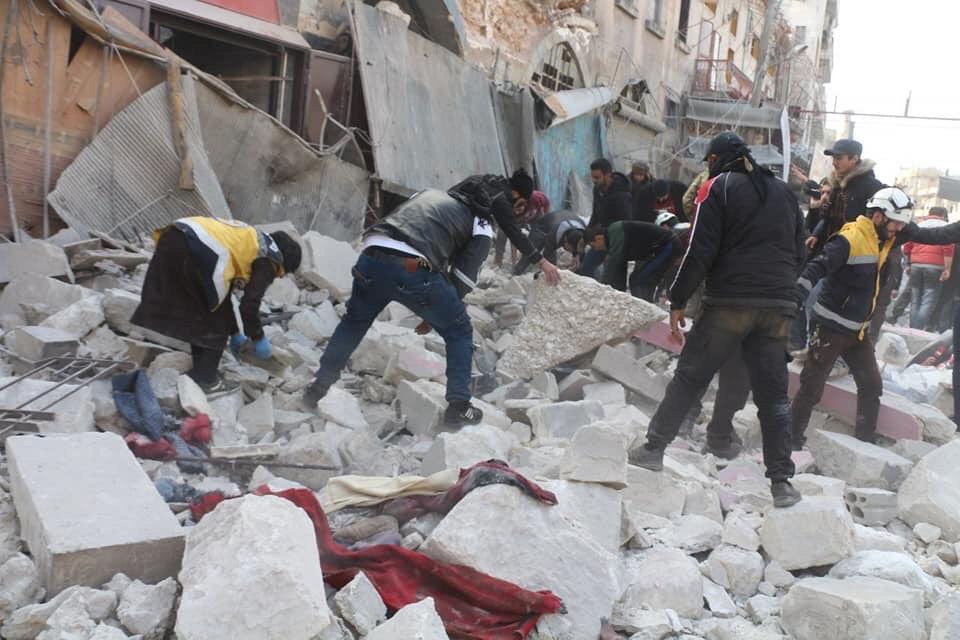 At least 10 civilians were killed and dozens more wounded in an air bombardment by Assad’s warplanes on residential districts in Idleb city on Wednesday, as a ceasefire went into effect in the province.

The Idleb Media Center reported that Assad’s warplanes struck residential districts in Idleb city with missiles, killing seven civilians and wounding dozens, while the Anadolu agency reported that the number of civilian victims had risen to 10.

Meanwhile, Russian and Assad regime warplanes intensified their bombardments of villages and towns in the southern and southeastern Idleb countryside on Wednesday after a truce and in light of the continuing violation of the ceasefire deal agreed upon between Turkey and Russia.

The Syrian Civil Defense manager in Idleb, Mustafa Hajj Youssef, told Alsouria Net that Maarat al-Nu’man in the southern Idleb countryside had seen an escalation by Russian warplanes since the morning, with Russian planes carrying out four strikes on the city’s infrastructure with more than 60 projectiles.

This came a day after a speech by Turkish President Recep Tayyip Erdogan in which he said that, “Turkey is determined to stop the Syrian regime’s violations of the ceasefire if needed.”

He continued: “We have succeeded in implementing a new ceasefire in Idleb and we hope it will last.”

The Idleb Media Center reported that Assad’s planes used barrel bombs to strike the towns of Kafar Roma, Hass, Maarzita, Beneen, and Montaf, as well as al-Talaata village and the city of Kafar Nubl south of Idleb, while it also struck Arihah, wounding civilians.

The escalation comes after a ceasefire went into effect, reached between Turkey and Russia on Jan. 9, 2020, and which began on Sunday amid continuing bombardments by Russia and Assad’s forces.

Turkish Defense Minister Hulusi Akar said that his country was holding talks with Russia to set up a “safe zone” inside Idleb province, which would be a shelter for displaced people, as he put it.

Akar made the remarks during a meeting held with media representative in the Turkish capital Ankara, where Reuters quoted him as saying, “We are in talks with the Russians to establish a secure zone, where the people can spend the winter period.”

He added that Ankara’s efforts in Libya and Idleb aimed to create peace and stability and to stop the bloodshed through a political solution, according to Anadolu Agency, adding that Turkish soldiers would not withdraw from their observation points in Idleb, but rather would reinforce them.

Turkish Foreign Minister Mevlut Cavusoglu said that Turkey would take the necessary steps in Idleb if it was threatened. He said this during a speech he made on Wednesday during a forum titled, “Turkish Foreign Policy in Light of the Prevailing Ambiguity at the Global Level.”