As violence breaks out following a kidnapping, Russia has moved into Daraa province to aid with negotiations and restore control writes Enab Baladi. 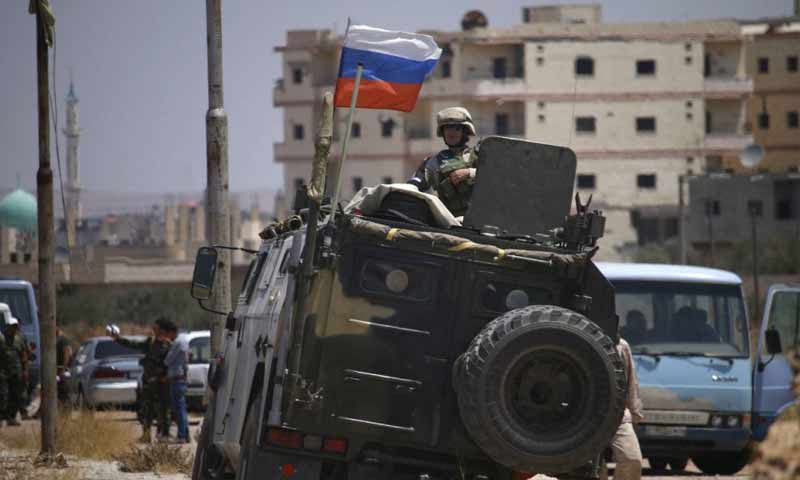 The eastern part of Daraa province has seen a security escalation between residents in the area and Syrian regime forces after the kidnapping of a number of regime fighters by militants, in a notable escalation in the province, which is under a Russian-sponsored settlement agreement.

Enab Baladi’s correspondent in Daraa said that on Saturday night militants from Nahtah east of Daraa had attacked regime military checkpoints and kidnapped a number of fighters along with their weapons in response to the arrest of a town resident.

The correspondent quoted military and local sources connected with the incident as saying that Russian police entered to release regime fighters and to resolve the dispute. The militants demanded that an imprisoned young man be released before handing over the kidnapped fighters, which led to the collapse of negotiations and a return to a state of tension in the area’s towns.

Motives of the crisis

The incident began with regime forces arresting a resident of Nahtah, in the eastern Daraa countryside, which pushed militants from the town to attack military checkpoints between Nahtah and al-Karak and kidnap fighters there as a means of pressuring for the release of the prisoner, according to a local source from Nahtah.

After that, the towns in the area saw an escalation in terms of skirmishes and clashes at checkpoints between militants and regime forces, as well as solidarity campaigns from the villages around Nahtah and Karak, most prominently in Miarbah, Sanamayn, and Sheikh Saad, according to images published by the Media Office in al-Musayfrah.

Residents in the area fear an escalation after the failure of the negotiations, along with the security tension which is prevailing and the state of fear over any response.

The Syrian regime has not yet officially commented on the incident.

A correspondent for the Sama satellite channel, Firas al-Ahmed, said on Facebook that militants had attacked a number of military checkpoints in Sanamayn and Nahtah, Karak, Inkhal, al-Ghariyeh al-Sharqiyeh, Tasil and Sheikh Saad, without any injuries.

Ahmed added that, “to clarify some media reports about the kidnapping of 28 members of the army and security forces and contact with them being lost, what’s correct is that unknown militants kidnapped six fighters from checkpoints in Karak and Nahtah in the eastern Daraa countryside.”

He added that, “the relevant agencies intervened directly in cooperation with residents and liberated three fighters, and negotiations are currently ongoing to return the three others.”

The policy of kidnapping regime fighters is a new phenomenon which militant have resorted to in Daraa over the last few days to put pressure on the Syrian regime to release prisoners. It is a notable development of the political and military events in the region, which has been under Moscow’s supervision since the settlement agreement in July 2018.

The area east of Daraa saw an escalation on Saturday with separate attacked by militants on military checkpoints between the towns of Saida and al-Ghariyeh al-Sharqiyeh, and near the Saida bridge on the al-Ghariyeh al-Gharbiyeh side, which killed three fighters and wounded another from the regime’s ranks, leading to their weapons being taken, according to the Sama channel correspondent.

Regime forces with Russian backing took the Daraa and Quneitra provinces in July 2018 in accordance with a “settlement” deal after days of bombardment and military reinforcements pushed the opposition to leave for northern Syria and Russian military forces deployed in the area as a guarantor and to monitor the agreement, which has seen daily violations, according to rights groups.

Daraa residents complain about the escalating security grip by the regime, with the repeated arrests of residents at security checkpoints, which contradicts the Russian promises guaranteeing the settlement agreement in July 2018, which stipulates stopping arrests and security prosecutions and to release prisoners from regime prisons.

The province has seen repeated attacks on regime military bases and security agencies and daily assassinations against figures accused of cooperating with regime security.

The latest of these attacks was on Jan. 5, 2020, with an attack by unknown militants on the National Hospital in Daraa with RPG rockets and light machine guns, with the attack transforming into clashes between the two sides, with the extent of the losses unknown.

Before that a colonel, Majdi Zein al-Deen, and four other fighters in the regime Fourth Division were killed during an attack carried out by militants in December, according to Sama.