2019 was a tumultuous year for Syria, with regime advances, stalling political processes and economic woes. Brocar Press runs through the past year's biggest events. 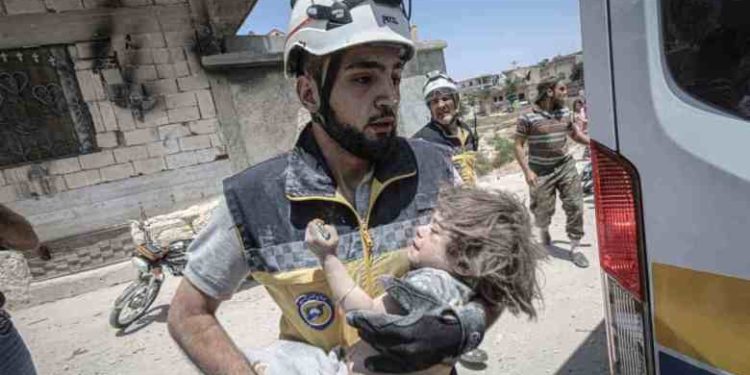 Blood, tents, economic collapse, the failure of the first step in the political solution—2019 saw all of these and other issues, as experts predict that the Caesar Syria Civilian Protection Act will be a card scrambling the deck and leading towards a solution in the country that has seen war for nine years after the regime imposed a military solution to repress Syrian demands for freedom and international and regional powers rushed to divvy up the country.

Under the shadow of the Sochi deal and the truce between the opposition and the regime, 2019 began with a war carried out by Hay’at Tahrir al-Sham against opposition groups in the western Aleppo countryside and in the northwestern Hama countryside and Idleb, whereby it imposed its control and influence over the Idleb area militarily as well as politically by way of its Salvation Government.

Tahrir al-Sham put an end to the presence of rebel groups that had held weight in the Syrian regime war.

In March, the Syrian Democratic Forces (SDF), backed by the US-led International Coalition, announced that they had taken control over the village of al-Baghouz in Deir ez-Zor in northeastern Syria, the last pocket of what had turned into a stronghold controlled by the Islamic State (ISIS).

The operation to take control of al-Baghouz led to the deaths and capture of hundreds of ISIS members and their families including women and children, both Arabs and foreigners.

As the SDF declared victory over the group, ISIS later registered movements and operations in the Syrian desert.

Syria officially without the Golan

On Mar. 25, 2019, cameras showed the American president singing a document in Washington, which recognized Israel’s sovereignty over the occupied Syrian Golan, with another vow to recognize Israel’s right to defend itself.

The reaction of the Syrian regime and its allies in the so-called “resistance” alliance came in statements that criticized and rejected the confirmation of the grab of Syrian territory, which Israel had annexed in a separate decision in the era of Hafez al-Assad, when cannons were turned on Idleb and Hama.

The regime enters the safe zone

After Tahrir al-Sham opened 2019 with a war to eliminate rebel groups, the regime escalated its violations of the Sochi agreement, signed between Russia and Turkey in 2018, beginning with an escalation in February, before then stepping up bombardments in spring of that year in preparation for a military action that ended in August. Throughout this period, it took control over areas of the northern Hama countryside (the towns of Kafr Zeita and al-Ltamaneh) and western Hama countryside (Qalat al-Madaiq and the surrounding al-Ghab Plains).

The regime also reached the outskirts of Idleb, taking control over Kafr Naboudeh, al-Hbeit, Khan Sheikhoun and Murak on the international highway, where the ninth Turkish observation point is located, which is still present, and brings in logistical materials through a regime checkpoint.

Notably, the areas where the regime advanced had been under the influence of Tahrir al-Sham.

Turkey mobilizes east of the Euphrates

Regime forces halted their advance, while Turkey on Oct. 9, 2019, announced the launch of a military operation against the SDF east of the Euphrates.

The operation was suspended after Turkish forces and forces from the National Army took control over broad areas east of the Euphrates, while the Turkish-American and Turkish-Russian agreements began with regards to the area which Ankara said it wanted to be a safe zone.

After the Sochi deal was signed between Russia, which is allied with the regime, and Turkey, Syrian regime forces entered into the area east of the Euphrates where it had been expelled since the first years of the revolution.

Oct. 30, 2019, saw the launch of the Constitutional Committee which is supposed to work to reformulate Syria’s constitution as a first step towards the stumbling political solution. But the regime derailed the committee’s work after proposing via its delegation, political agendas that have nothing to do with the constitution and go against the committee’s mandate, and which they described as “national principals.”

Regime forces backed by Russians and militias resumed military operations in Idleb, whereby it took control over widespread areas in the southern and eastern countryside of the province and made it up to the outskirts of the city of Maraat al-Nu’man on the international Aleppo-Damascus highway.

Notably, the military mobilizations coincided with the political movements, with observers linking the regime movements in Idleb to those of Turkey east of the Euphrates, in an indication that the Russian-Turkish agreement had changed the map of control in Syria.

The regime and Russia’s operation killed and wounded thousands of civilians and expelled more than a million people since the start of the year to camps and border villages according to official statistics.

Baghdadi’s death and the fate of Syrian oil

US President Donald Trump on Oct. 27, 2019, delivered a speech at the White House in which he declared the death of the ISIS leader in an American operation, which killed him in the town of Barisha in northern Idleb.

After describing Baghdadi’s last moments, in which he said he fled into a tunnel and screamed and wept before blowing himself up with his children, Trump discussed Syrian oil, saying that it was for the Americans and Kurds.

Russia east of the Euphrates

Russian entrenched its military presence east of the Euphrates in accordance with the Sochi agreement with Turkey, with the deal allowing joint Turkish-Russian patrols on the safe zone border.

The Russian Zvezda channel reported on Nov. 14, 2019, that Russian forces had sent three helicopters, one of them an M8 and two M35s from Hemeimeem to the Qamishli airport, as well as a Pantsir missile system, saying that the aim of these was to secure the operations of the military police carrying out patrols in northern Syria, in accordance with the terms of the Russian-Turkish military deal.

There was no end to protests against the regime and its security grip in Daraa, which had carried out a settlement with the regime that Russia guaranteed last year. Security chaos reigned in the province, with fingers of blame pointing to the regime’s implications in it.

In addition to the return of graffiti on the walls, roadblocks and strikes, and the revolutionary flag being raised, there were protests at night in Daraa in solidarity with Idleb.

The year 2019 ended with the most prominent event with the Caesar Syria Civilian Protection Act, which experts believe could alter the course militarily and politically.

President Trump signed the act on Dec. 20, 2019, putting the law into effect, years after it was put forward and impeded for various reasons.

The law is a card that will scramble the deck and flip the table on the players.

The signing coincided with prominent events in Syria, which included the rush to normalize with the Syrian regime; the major and quickening economic collapse in the interior; the regime’s rejection of the political solution by obstructing the Constitutional Committee; and the attempts at reconstruction in the areas it controls.

It is expected that brakes will be put on the normalization attempts and reconstruction will be derailed, and that the economic situation will be made worse, and that the regime will head toward a political solution.