Gangs run by Bashar Talal al-Assad and Hafez Munzer al-Assad are under pressure to give up their heavy weapons and submit to Russian authority writes Al-Modon. 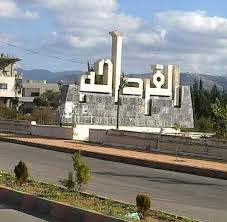 The city of Qardaha has returned to forefront of recent events, with the start of a deal between the regime’s forces and the Assad family militias. The agreement is designed to end the military blockade imposed on the city and for a security council, which is under Russian control, to be handed lists of militia members.

It appears that the regime’s agreement with Bashar Talal al-Assad and Hafez Munzer al-Assad’s gangs includes allowing them to carry out their illegal “economic” activities on the condition that they hand over their heavy weapons.

Bashar Talal and Hafez Munzer’s armed gangs have been elusive for months despite a security cordon imposed on the town by regime forces, who do not dare to actually storm the area.

The matter of getting the gangs out of Qardaha has turned into an impossible mission for regime forces blockading the city. Since January 2019, the regime has tried to remove heavy weapons owned by the militias from inside the city and its environs, by blockading Bashar Talal’s economic interests in Lattakia and blockading Qardaha itself.

The deadlock has reached an advanced stage, with Bashar Talal’s militia bombarding regime military positions with mortars and Grad rockets multiple times and threatening to blow up Hafez al-Assad’s tomb in Qardaha.

Al-Modon’s sources said that the leader of the “terrorist 25th Division,” General Suheil al-Hassan, also known as “The Tiger”, was leading the protest against the men of the ruling family, with Russian support, with the aim of ending the family gangs’ military presence in Qardaha.

Contrary to reports that Russian were soldiers wounded during the indiscriminate bombardment by Bashar Talal and Hafez Munzer’s militias about a month ago of opposition positions in Jabel al-Akrad, the casualties were actually from Hassan’s forces, according to the sources.

Therefore “The Tiger” has put pressure on the regime, via the Russians, to remove the heavy weapons in the hands of militia leaders in Lattakia, including Bashar Talal and Hafez Munzer’s militias, which are fortified in Qardaha.

The killing of two girls in Qardaha a few days ago sped up the militias implementation of the deal with the regime and the withdrawal of their weapons as a result of the popular anger against the indiscriminate weapon use.

Hassan’s attempts to resolve the matter increased anger towards him from the Assad family. Members of the family did not take comfort in the Russian measures, nor with his growing influence among Alawites, taking advantage of continuous Russian pressure on the regime to withdraw heavy weapons from the militias.