With support from Russia, the regime is moving to secure territory and influence in areas east of the Euphrates, moving against Turkey and the US writes Al-Arab. 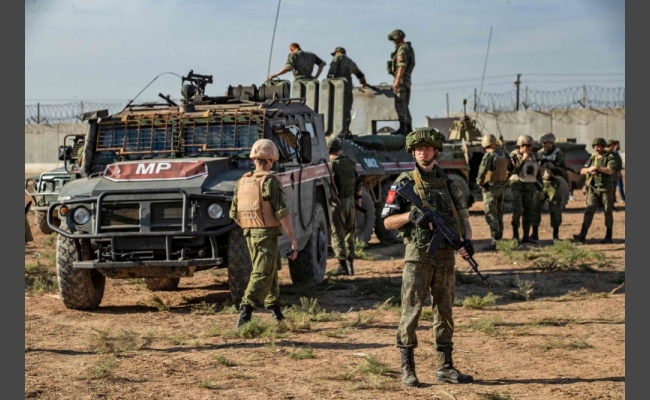 As the 15th joint Russian-Turkish patrol runs at a depth of six kilometers from the Turkish border, along a stretch measuring 48 kilometers, in accordance with the deal signed between the two side, Russia is playing a mediator role between the Damascus government and the Syrian Democratic Forces (SDF).

The Syrian regime, with Russian backing, is trying to grab all the keys that will enable it to take control over the area east of the Euphrates in the future, in preparation for the possibility of regaining control over the oil fields, weakening the Turkish position, and maintaining the possibility of expelling them at a later time from their areas of influence in the Peace Spring, Olive Branch and Euphrates Shield operational areas.

It is interested in taking control over the main strategic roads, as well as gaining, recovering and conscripting its supporters from among the local residents in the villages surrounding these roads.

It appears that there is a convergence between Turkish interests and those of Russia’s and the regimes, in terms of arranging the situation east of the Euphrates. Russia agreed to and recognised Operation Peace Spring, while pushing regime forces to ally with the SDF militarily in battles for control over the branch roads from the strategic Tel Tamr north of Hassakeh, after taking control over it.

The Syrian Democratic Forces, which has lost an important bulwark with the withdrawal of American forces from the areas they control, have become subject to revenge attacks by Turkish forces and the National Army.

With regime forces taking control over the Hassakeh-Tel Tamr road, the Syriac Military Council, stationed on the road, where there are 34 Syriac villages, will be forced to give their loyalty to the regime and to leave the SDF.

This is in addition to the fact that the regime has formed National Defense units from local residents. This unit, which will serve as a loyalist militia, will protect the road and their local make up will mean it more likely they are accepted, as opposed to sending fighters from its army.

Meanwhile, the regime sent reinforcements to Hassakeh, which it now controls, after the American withdrawal, in order to reactivate its former party loyalists to run party and union elections and form loyal and influential leaderships along the model of what has happened in other areas under its control. Representatives for these regions had been residents of Damascus and while they were affiliated with these regions, their connection with their residents was nearly cut off during the period in which the Self-Administration took control.

The regime is skilful in the game of recruiting loyalists, especially those who had previously worked in its party and bureaucratic agencies. It appears that its relations with these entities was not cut off, and it is now trying to bring security stability to areas that have witnessed heavy bombardments, displacement and demographic change, and which could create a relatively safe environment for the partial return of displaced people to their areas, which would improve their image that has been eroded within the international community. Not surprisingly, NGOs have been set up to offer humanitarian support projects for this purpose.

The regime is going beyond what the Turks want from the Peace Spring area, where Turkish President Recep Tayyip Erdogan is expressing his intention to settle a million displaced people in the safe zone and to set up development projects but lacks Western-European support—which he was trying to get at the Turkish-German-French-British quartet summit, which was held at the sidelines of the NATO summit, as he seeks to hold the annual periodic meeting in Istanbul for Syrian affairs.

The West views Operation Peace Spring with an eye to reject it, because it has targeted areas controlled by the SDF, which has done well in defeating the Islamic State, and because the area has become occupied by Turkish forces and the National Army, which is of an Islamist character, and which rights reports have accused of violations against the residents of Afrin.

The regime has taken control over the area from Hassakeh to Tel Tamr, and even areas up to the Ras al-Ayn countryside, which are the areas richest in Syrian wheat, but its ability to benefit from all of this economically remained limited. The oil fields in Hassakeh and Deir ez-Zor are under US control and the coalition forces continue to enjoy strong relations with the SDF.

It does not appear that the Americans want to stop preventing the regime from exploiting oil wealth, especially after the possibility that the  White House approves the Syria Civilian Protection Act, or the Caesar Act, next week, after it passed with overwhelming majority in Congress.

Russia is still circulating in the Syrian quagmire, without being able to profit from its military intervention. The ball is now in its court. So will it preempt American sanctions by imposing a political change on the Syrian regime? Or will it still have cards to play with the United States? Or will the continued Iranian penetration into Syria limit its ability for change?