As the Syrian pound drops to it lowest rate since 1919, Russia is stepping in to to pump foreign currency into the Damascus and Aleppo markets writes Al-Araby Al-Jadeed. 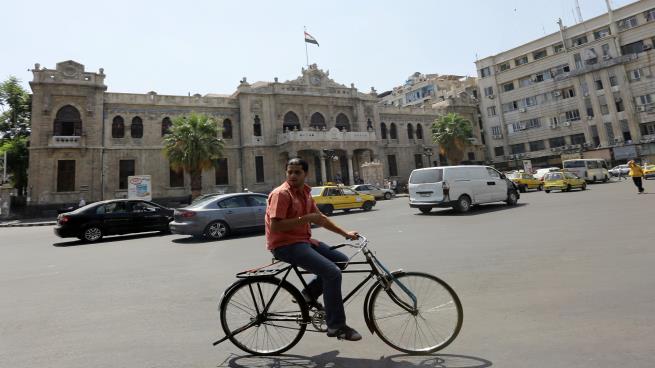 On Tuesday, an official source from Damascus told Al-Araby Al-Jadeed that Bashar al-Assad’s government was living in a “state of fear and frustration” after the deterioration of the Syrian pound’s exchange rate to lower than 750 pounds to the dollar, which is the lowest price recorded since it started trading in 1919.

The source added that the Assad regime has, “developed since Tuesday a plan to control the exchange rate in coordination with allies in Moscow, to pump foreign currency into the Damascus and Aleppo markets,” and that this plan would happen through Russian support until there was “economic balance in the country.”

The source said: “The government of Prime Minister Imad Khamis has been blamed for widespread corruption and the collapse of the Syrian pound. It’s likely that Imad al-Azzab, who is close to Asmaa al-Assad, will be tasked with forming a new government in the coming days.”

The source said that the Bashar al-Assad regime media had “polished Azzab’s image during this period, and it is likely that he will form the government when he returns from meetings at the UNESCO conference in which he’s taking part in France.”

At the same time, media sources said that the Assad government’s Finance Ministry had put precautionary freezes on the MTN company’s assets and members of its board on Sunday in exchange for a fine of 20 million Syrian pounds due to a customs violation committed by the private comms company, which is the second mobile operator in Syria, for illegally importing goods worth 4.7 million pounds.

The sources explained the freeze of the company’s assets as: “Bashar al-Assad aiming to take over the company, as had been done a month earlier with SyriaTel, owned by his cousin Rami Makhlouf.”

According to the sources, MTN has suffered from restrictions and a decline in its profits to the third quarter of the year, down to 693 million pounds, down 88 percent from its profits in the same period last year.

Syrian economist Mahmoud Hussein told Al-Araby Al-Jadeed on Tuesday that the freeze on MTN assets under charges of smuggling is, “a pretext related to Asmaa al-Assad extending control over mobile phone networks because the share of the Lebanese partners, Taha and Najib Mikati, is small.”

He added that, “Ms. Assad reportedly will found a third company called EMMA Tel, to fully own mobile communications after Rami Makhlouf, SyriaTel’s owner, was curbed and an officer from the Republican Palace appointed director of the company last month.”

Hussein continued: “The freeze on the assets of the president and board of MTN do not come, as promoted, out of an anti-corruption campaign led by Asmaa al-Assad, but rather for two aims: First, to promote Ms. Assad and reduce the control of yesterday’s men—mainly Mohamed Makhlouf and his children and partners—and second, to gather fees from businessmen in exchange for not being held to account, to try to fill the empty state coffers.”

The Assad government relies on precautionary freezes to compel businessmen to contribute to importing necessary goods for Syrian markets, primarily oil and wheat, and making payments to the support fund for the pound, established by the Commercial Bank two months ago.