For those returning to Syria from Jordan, the future is uncertain, with no guarantees of shelter or their safety repots Brocar Press. 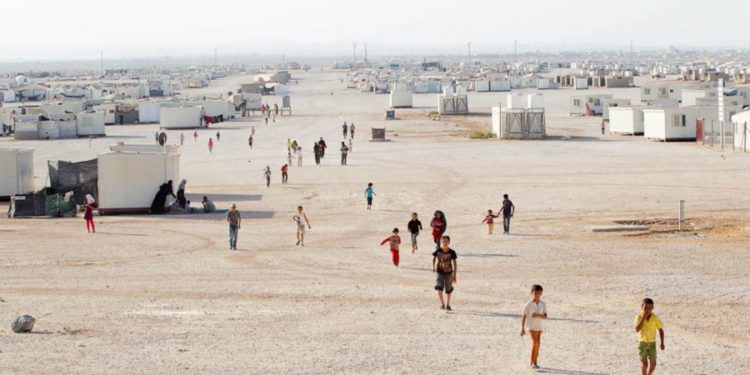 “I won’t go back in the near future. I’ll stay in my tent in the Zaatari desert, even if I’m alone. I won’t go back to a regime that trades in my life and the future of our youth and puts us whenever it wants between the choice of death or acceptance. The camp is harsh and life in it is bitter. But it is the most merciful of all the evil we’ve experienced over the decades—and not just since the start of the revolution,” says a resident from the Zaatari desert camp in northern Jordan near the border with his town in Houran.

But what’s the difference between you and your neighbors who have left the camp and arrived at the Nassib border crossing to celebration and reception? I ask my interlocutor.

“Celebration! You talk about it and the world sees it. We don’t want celebrations. We want houses to live in, and they have been destroyed by regime barrel bombs. We want international guarantees that the regime won’t exploit our children and throw them onto the front lines to kill our brothers in the north. We want to keep our human rights—no more than that, otherwise we stay in the camps. It’s true there are those who are going back to their country, but they are few compared to the total number, and they have their own situations and particularities. We are in touch with them, and we are not getting encouraging responses. The situation is very dire, and needs comprehensive treatment.”

In Jordan, there are contradictory figures about the number of Syrian refugees who have voluntarily returned to their country. This contradiction has been attributed to the lack of differentiation between the refugees and Syrian residents who are not refugees. While UN agency figures indicate that about 15,000 Syrians have returned since the opening of the Nassib border crossing in October 2018, Jordanian sources say that the number of non-resident refugees who have returned voluntarily is no more than 5,000—a reference to the Syrians who entered Jordan formally through formal crossings on the regime and Jordanian sides.

The most recent statistics from the Russian center say: 121,252 people, including 36,402 women and 61,827 children, have returned via the Nassib border crossing, but other statistics say that 12,373 Syrian refugees have decided to return to their country from Jordan since mid-October last year through Feb. 20, 2019. The head of the Passport and Migration Center at the Nassib border crossing, Col. Mazen Ghandour, said that the number of returning refugees to Syria through the crossing was 16,500 refugees since October up to the end of March.

The Jordanian newspaper Al-Ghad questioned the purpose of the higher numbers from the Russians, and whether they were meant to encourage more refugees to return despite the lack of guarantees for them from the international community and to show that the Russian initiative had succeeded in returning refugees to their country and that the situation in their country had stabilized and life had returned to normal, or whether there were political agendas behind these numbers?

“The Air Force Intelligence summoned my elderly father. Even though they didn’t arrest him they insulted him with phrases we hear every day and asked him questions that would normally be asked of someone from an international intelligence agencies: Who did you work with? Your children? Jordan, the NGOS, the commanders of rebel groups?—all of that just to end the meeting by signing a document that said that my father blamed terrorist groups for destroying our house and asking the Syrian state for ‘sympathy and compensation.’”

Another image is no less harsh than this, with a man in his 80s whose son was killed by Assad’s forces in battle, but the Air Force Intelligence branch called him up to sign a document that stated terrorist groups had killed his son—meaning forcing recognition that his son was a terrorist and that his killer was innocent and that he acknowledges this and was forced to attest to the innocence of the regime.

At the Nassib border crossing at the first moment of arrival, people gather and the photos and media interviews begin, with people talking about the longing for the country and calling on others to return. The scene doesn’t end with chants and welcomes for those who were displaced a few years ago, but questions about their future once they’ve left the Nassib center—every situation has its own particularities, and every intelligence agency has a way of dealing with returnees. In terms of services, everyone is equal before the authorities and their reactions. In response to calls for improving services, it has been reported that, Major General Mohamed Khaled al-Hanous said, “Anyone who doesn’t like it, the door is wide open.”

The infrastructure is rickety and people must be patient or work to restore some of the structure of their former homes. In some rich cities, due to the long absence of their residents, financial campaigns have succeeded in restoring some roads, schools and hospitals, as is the case in the towns of al-Jiza and Saida. But the rest to the west and east have to wait a long time or return and subscribe to the vision offered by Hanous. Rents for popular housing in Daraa have increased five times after the settlements and the return of a few thousand refugees, according to media reports.

The picture of Daraa city—which is closer to the service centers—shows that nothing is changing. The infrastructure in the city destroyed during the war years needs huge amounts of money to rebuild, as building it “from scratch” is better than the restoration operations, which include clearing rubble and studying the infrastructure condition, which has delayed the start of any projects related to repairing infrastructure, with the regime preferring to leave it to its fate or its situation being sorted out by residents as they see fit without approving the settlement.

More than that, sources tell Brocar Press that “the repairs to any house are subject to many approvals, starting with agreements that terrorist groups were responsible for the destruction that occurred, and then the need to pay the public agencies for phones, electricity and water for the past years, which might reach fanciful figures that people are unable to pay. Then there are approvals from the towns and paying for building materials from the black market at inflated rates, and then many ‘bureaucratic’ measures and reviews that eat up returnees’ days, after years of their subjugation.”

The last image of return shown by media sites is of a young man who left the Nassib border crossing and then went missing and was found dead nearby.