The recent assault on northern Syrian has created a massive wave of displacements and Idleb is buckling under the pressure reports Al-Modon. 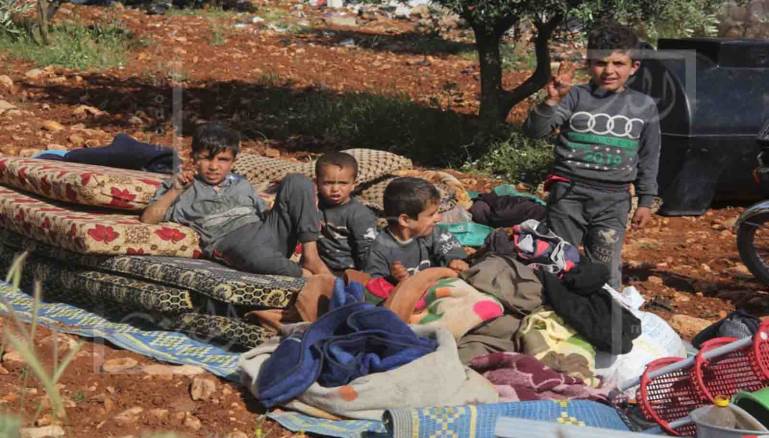 Huge waves of displacement have headed to northern Idleb from the northern Hama countryside and the southern Idleb countryside, numbering around a million people, as a result of the Russian military operations that began in April. This has led to the area being inundated with numbers that exceed its ability to absorb them, and well beyond the maximum that service agencies are able to provide in light of the almost total absence of outside support, according to Al-Modon’s correspondent, Osama Shihab.

Idleb’s Health Director Munzer Khalil told Al-Modon that the medical sector in the north was suffering from enormous pressure, at a rate of 400 percent—the general rate of pressure on the area. Khalil said that the Health Directorate and its partners had worked and were continuing to work to support the referral and ambulance systems in the southern areas in order to transport the wounded and sick to hospitals away from the front lines and bombardments. Mobile clinic have also been deployed in areas with newly-displaced people, in light of the general lack of outside response from United Nations agencies and donors, which accounts for no more than six percent of needs in the current situation.

Most medical cases that the medical centres receive are wounds resulting from bombardments, as well as gastrointestinal, skin and psychological illness, as well as a major increase in the rates of psychological trauma, according to the Idleb Health Directorate.

Current food support is limited to just 10 percent of the residents’ needs, according to a humanitarian worker. Most residents suffer from severe poverty due to the lack of work. The area is haunted by the spectre of malnutrition, which will strike if the situation continues in this manner.

As a result of the heavy demographic pressure, bakeries have expanded production lines and increased working hours, with multiple shifts, in order to enable them to ensure bread supplies. On average, families need about 1,000 Syrian pounds a day just to cover the price of bread.

The head of the services sector in the Camp Affairs Directorate, Hamza Abdel Rahman, told Al-Modon that the projects to support displaced people with bread for free were covering no more than 10 percent, due to the scarcity of food aid projects and the lack of necessary funding and the lack of flour subsidies—especially with the increasing number of residents. Before this most recent wave, displaced people in the north were receiving bread for free at a rate that covered about half their needs.

Northern Idleb also suffers from a lack of drinking water, with most residents depending on buying water. A water tanker on average costs about 2,000 pounds.

Due to the lack of drinking water, and the dependence on surface water, which can mix with sewage due to the destruction of sanitation infrastructure, rates of water-borne diseases have reached unprecedented levels, in addition to air pollution resulting from gas burners.

More than 191,000 students have also been displaced to northern Idleb, and schools are unable to absorb this number. The director of the education media office in Idleb, Mustafa Hajj Ali, told Al-Modon: “We need to set up more than 100 emergency education units to absorb the students.” He said that, “UNICEF has a major responsibility for this crisis, as it is an international education sponsor, but it has not offered any response to this crisis, and is still supporting the Assad regime and ignoring its responsibilities for this huge number of students in the liberated areas.”

Residents have gathered in large numbers in small spaces in northern Idleb, which has also created large amount of traffic, especially on the roads in the north, which are mostly small and old roads. A bigger problem is the lack of roads for camps, with most depending on dirt agricultural roads that are mostly cut off in the winter, which is coming soon.

The Bab al-Hawa crossing administration is currently expanding and repairing the main roads in northern Idleb, but it will not change much in terms of the size of the problem, given that it is only targeting some main roads.

Another problem is that most places where people have gathered lack cleaning projects, with trash disposal lacking entirely. Most areas need sanitation works, which is a complicated problem.

The Camp Affairs Directorate told Al-Modon that the camps have not received sanitation projects and humanitarian organizations have not served the camps with these necessary projects, except for 180 double “bathroom” blocks, distributed among some camps, which do not cover more than five percent of current needs.